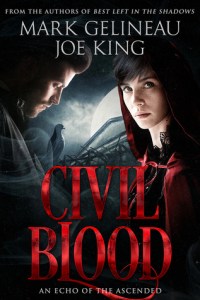 The King of Aedaron reigns in splendor, while far below, in the streets and alleys of the underworld, a different kind of king emerges.

Alys and Dax have always been caught in the middle. Once they fought for love, and their worlds tore them apart. But now as they are forced back together, they must choose whether to fight once again.

But for what? And against whom?

In the world of Lowside, nothing is as it seems.

Mark Gelineau and Joe King have done it again! Civil Blood is full of all the atmosphere and charm of a Victorian Murder Mystery, but with a dirtier and darker feel. In this sequel to Best Left in the Shadows, we return to the streets of Lowside and back into the company of Alys and Daxton.

This time Alys is asking Daxton for help because someone has been running a muck in Lowside, killing gang members and setting fires, all whilst impersonating Alys. Alys and Daxton must find out who has been causing all this trouble, before someone else retaliates and takes Alys out!

I find this miniseries, a lot slower than the other three. It lacks the thrilling and horrifying, paranormal aspects of Rend the Dark, and the majestic battle scenes of A Reaper of Stone,  instead favoring to concentrates on the relationships between people. There is such a complex web of deceit and lies behind Civil Blood that I feel we’ve only really scratched the surface so far. The sheer amount of manipulation going on is mind blowing! Daxton and Alys want to trust each other but can’t quite make that final jump… and who can blame them when there are so many secrets between them.

This was the first time I have read one of Mark Gelineau and Joe King’s books and felt that it didn’t quite appease my appetite for their wonderful storytelling. I feel it necessary to point out, at this point, that this was my least favourite story-line out of the four, and this may be at the root of my complaint, but for me, Civil Blood felt like an in-between book, a bridge between the initial action of Best Left in the Shadows and what is to come. Its so heavy with the development of new characters and the history that separates Alys and Daxton that I felt, very little progress was made and that left me feeling a little underwhelmed.

There was still plenty of things I did enjoy, such as the sparks that fly between Daxton and Alys. There is still a lot of witty banter being thrown back and forth between these two, as they fight their attraction to each other. They have developed a little more trust, but as I’ve said already, they’re still holding their cards close to their chests. The other thing I love about this series is the atmosphere. It’s hard to capture so much in so fewer pages but somehow Gelineau and King always seem to deliver the most amazing sense of place. I could imagine ever corner, ever turn, basically every aspect of Lowside thanks to their descriptive abilities.

All in all this wasn’t what I wanted it to be, but it’s the building blocks towards something bigger… I can feel it! I will just have to learn to be more patient and enjoy the slow unveil.