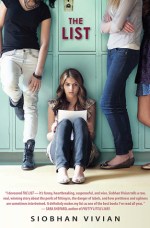 Thank you to Netgalley and the Publisher for the chance to read this book in exchange for an honest review.
Publish Date: 7th April 2016

It happens every September– the list is posted all over school. Two girls are picked from each year. One is named the prettiest, one the ugliest.

With THE LIST, Siobhan Vivian deftly takes you into the lives of eight very different girls struggling with issues of identity, self-esteem, and the judgements of their peers. Prettiest or ugliest, once you’re on the list, you’ll never be the same.

This book was perfect. I expected it to perhaps be some silly little thing, instead it’s shockingly deep and it touches on so many different issues girls and even women face in their lives. It’s like a condensed study of society in one place. As women, we’re told daily that our worth is tied up in how we look and here we have a snap-shot of just how damaging that can be to our self esteems. Being labelled ‘pretty’ doesn’t help with self worth, despite what people may think. If it’s not something you feel, you wont accept it. And let’s face it, we’re taught not to accept it. We see millions of adverts daily that tell is our hair isn’t shiny enough, our lashes aren’t long enough, our lips not purple enough etc and yet when we say that we’re not pretty, we’re told to stop fishing for compliments.

In this book there are 8 girls on the list, 4 ‘pretty’ and 4 ‘ugly’ , one of each for each year of american high school, and they each react differently to being there – obviously they would, being different people. Each chapter is with a different girl, it’s in third person so it’s not exactly each point of view, but we sort of see into their world for a little bit and it’s heart breaking. It also shows that the school as a whole has allowed the list to dictate their assessments of people, it’s one person’s assumption and yet everything changes accordingly. ( Frankly I was shocked that it took a new head teacher to start investigating, if the list has been going on for years – why hasn’t anything been done before?!) Friendships are dropped, little newbies are suddenly invited to parties they wouldn’t have been invited to and body issues are blown wide. Each character is whole and rounded and quite believable as a person. I was however, still struggling with who was who at 50%. 8 people and their friends – that’s a lot of people to keep track of, especially for someone who has trouble with names!

This book is so well written. It’s smooth and matter of fact and when you’re not reading it you’re thinking about it. It’s not my usual type of book and the only reason I requested it was because Netgalley sent an email about it, even then I wasn’t sure, but  I was itching to request something and I’m so glad I did. While there were no revelations for me in this book – I’ve already arrived at the mindset that this book seems to promote – it was nice to see it being called out. It’s highly relateable too, I’m pretty sure a high percentage of both girls and boys have felt something of one of these situations sometime in their lives.
Unfortunately, it ended before the end of the story and I don’t like it! I wanted things to be resolved! Well, I guess some were. One girl was on the way to finding herself, despite someone else. One was seeing her sister and her situation in a new light, one was becoming better and one was connecting more.

And, when we find out who wrote the list, and their reasons, well, it’s hard not to despise them, they have no idea what they’ve done. I wish the book had kept going, I wanted them to know exactly how they’d ruined each person on that list, because they had. Perhaps, with help, some of the people of the list will grow from it, but really no one deserved to be there.
Except perhaps one person and she probably didn’t think she did.