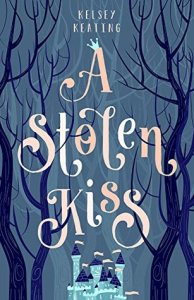 Derric Harver never expected to amount to anything more than the palace stable-boy, but when Princess Maria’s curse keeps her from accepting a prince’s proposal, she turns to him for help, and he doesn’t dare refuse.

I’m only 10% of the way into A Stolen Kiss but so far I think it’s kinda cute and quirky! The writing seems aimed at early teens as it’s simplistic in style but it works well because it gives it a light and airy feeling.

A Stolen Kiss completely reminds me of Ella Enchanted at the moment, with it’s Medieval fairytale vibes and the princess having been cursed and now having to go in search of the Sorceress who put the spell on her.

I really liked the idea of their history being the classic fairy-tales, I hope we get to hear some different interpretations as we go along.

Character wise, I’d like to see more of the history behind Derric’s family and find out how he is linked to Princess Maria. I’d also like to find out more about Prince Humphrey. he seems like an odd one to me.

All in all I predict a lot of fun and adventure coming my way this weekend. I will report back to you on Sunday with a full review!