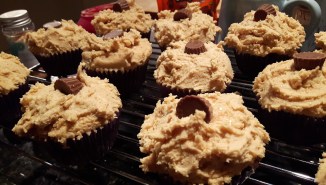 Well, they weren’t a complete fail…

Yes, I made this up, yes I did a few things wrong. Makes sense to me to make this post so that you don’t make the same mistakes. Make your own! You’re welcome.

So I made a chocolate sponge cake mix and put some in the bottom of my cupcake cases. I made it thick so that the peanut butter cup wouldn’t sink to the bottom. I put in the cup and then decided it needed peanut butter on the top. This perhaps made it too high, but we won’t argue the point.

Next I added milk to the mix still in my bowl to make it runnier so that it’d go down the sides of the cups on the cases. It was lucky I did because I was short on mix even with the dilution.

I then cooked them until they were done. Well, I wish I’d cooked them till they were done, when I took them out of the oven they were over done. I was waiting for the middle to rise, forgetting there was barely any cake mix there so it wouldn’t. Shut up. Moving on…
I then made a basic butter icing, but I replaced half of the butter with peanut butter. I then attempted to use my new icing contraption to make nice swirly icing. Nope COMPLETE fail. I’ve tried it 3 times now with different icing and I can officially say It doesn’t work for me. So the messes I’d made were attached with a spoon to make the spiky pile you see way above. And because I was trying to make them fantastically sickly and peanut buttery, I added a mini peanut butter cup on the top!

Don’t wait for the middle to rise.
Make more cake mix
Use an icing method you know works.

They weren’t bad, no one complained, no one complimented them either. Learn from my mistakes. Made them before? Tell me what you did!