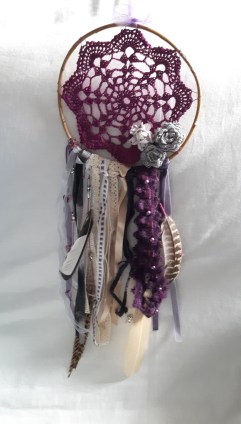 I’ve loved dreamcatchers since I first saw them in america when I was a child. I used to have one at each window in my room – however they both disintegrated and I’ve yet to find one that I like to replace them with. The obvious answer of course is to make my own!

You can easily locate kits to do so all over the place however there’s just one small issue, displayed in my friends photo here: 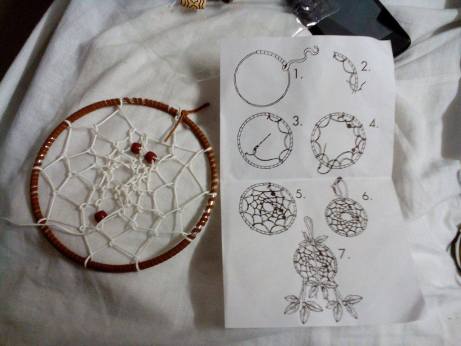 Not enough edging to cover the hoop! Also, apparently the weaving instructions weren’t too helpful.

Having seen fancy lacy hand made dreamcatchers all over the show I decided I could easily make one – especially as I’d just taught myself to crochet! And as it was my friends birthday soon I’d make one similar to one I knew she liked. Luckily I’d had vague notions of doing this with another dreamcatcher style way back before christmas so I’d been collecting things for a while. Like willow hoops and [some of the] feathers – both from the garden etc as well as bunches of ribbons – not from the garden.

First step was to see if I actually could make a doily for the middle.

My test was a success! I used this method HERE. Please note: this video is american and subsequently uses american stitches – conversions can be found online for those unsure.

Next I made the final doily and sewed it onto the willow hoop with the same colour crochet cotton. 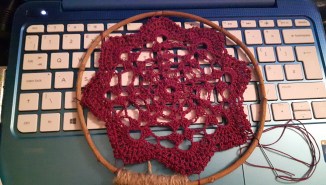 I didn’t time it or anything so I’m not sure how long this actually took me. I made sure that one of the ‘spikes’ was at the ‘top’, the opposite end of the hoop to the join I’d covered with garden twine which I was intending to hide behind the ribbon tails. Which I did do! I pulled out my collection and just started tying bits on. 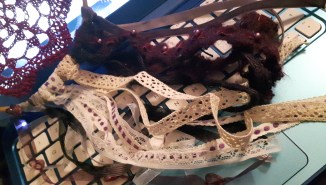 Then I made two roses using THIS method – also american crochet – only I used some sort of thicker thread my mum had and a 3mm hook. I don’t have a close up of the nice grey roses, but here’s some others I’ve made using the same method. The pink one is done with wool, the smaller ones are done with THIS cotton, doubled and a 3mm hook as it’s thinner than the original stuff I used, though I’m thinking it could perhaps be better with a 3.25mm or a 3.5mm hook. The red one is only half complete, it has only 2 layers of petals and is waiting for it’s third layer and it’s centre. 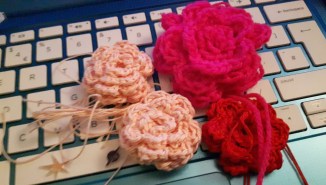 I placed the roses where I thought they’d look good then I tied them on with the ends left over from making the roses. I added a paper rose because I felt like it. I also used the purple of the doily and the grey of the roses to thread some beads on to hang as well as the feathers.

This is pretty much a ‘to taste’ process. Add things you like and stop when you think it’s enough.

At the time of completion this was the very first crochet thing I’d completed (I’d been making a baby blanket for 4 months – I lost count how many times I unpicked it) and I’m pretty darn pleased with myself. I will be making myself one of these handsome devils as soon as I have a moment (and another nicely circular willow hoop) as I’ve chosen things to make for people and time scales are sort of sensitive…

It certainly takes longer to make than it does to explain it. Though it’s not a stressful making, I personally find crochet somewhat relaxing and easier to do than knitting. But then I haven’t tried knitting with the help of youtube videos.

I used THIS video to learn to crochet – being left handed. There are also right handed ones available or if you don’t have the time to learn you should be able to buy doilies from places such as etsy or amazon or even ebay, though I haven’t checked so don’t hold me to that. The doily video was right handed but I found that once I knew what I was doing and how to do the stitches she mentioned it was easy to work out what I needed to do, converting the rose to left handed was a little harder. I’ve adapted the method in the video and written my own pattern to make it easier for myself as I’m making a whole batch for a blossom ball but right now I’m able to make these roses from memory having made 4 and a half in the past 2 days.