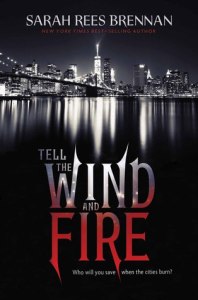 Thank you to Netgalley and the publisher for the chance to read this book in exchange for an honest review.
Publish Date: 5th April 2016

In a city divided between opulent luxury in the Light and fierce privations in the Dark, a determined young woman survives by guarding her secrets.

Lucie Manette was born in the Dark half of the city, but careful manipulations won her a home in the Light, celebrity status, and a rich, loving boyfriend. Now she just wants to keep her head down, but her boyfriend has a dark secret of his own—one involving an apparent stranger who is destitute and despised.

Lucie alone knows of the deadly connection the young men share, and even as the knowledge leads her to make a grave mistake, she can trust no one with the truth.

Blood and secrets alike spill out when revolution erupts. With both halves of the city burning, and mercy nowhere to be found, can Lucie save either boy—or herself?

This is my 100th review for Netgalley. Thank you to all the publishers and authors who have shared their work with me!

Tell the Wind and Fire is a complex and confusing novel. It’s a retelling of the Dickens’ classic, A Tale of Two Cities, and while I haven’t read the latter, you can tell that a lot of inspiration has been taken from it, especially the ideals and gruesome nature of the French Revolution.

I really wanted to love this book, mainly because I had heard great things about Sarah Rees Brennan’s work but also because I love a good retelling. Unfortunately I found this really hard to get into. I spent most of the novel really confused and even though there was an attempt to make me understand the characters, there really wasn’t a single character that I liked.

Sarah Rees Brennan has tried to create a very complicated new society, one that I’m sad to say, I struggled to grasp. The idea of light verses dark was easy enough to understand. The Light were the rich elite, those fortunate enough to be born on the right side of fortune and The Dark were those thought to be criminals and selfish beings that took the light from the blood of the rich/light in order to weld magic. The Dark were the outcasts of society who were made to live on the poor and squalid side of New York, in the dark. Not all those living on the dark side were Dark Magicians. There was also the families of them. Sometimes even they had light magic but by association they were also shunned from society. Only those that were children of Light or non-magical families were allowed to use Light Magic and therefore Light Magician’s of Dark families were usually killed. Perhaps I understood more than I thought! One thing that still puzzles me is the significance of the gems. Did they really need them to do magic or were they to intensify magical powers or were they just like diamonds? A way of telling someone was ‘the right sort of person’? If someone could clarify this for me that would be great.

I felt the main character Lucie Manette and her Aunt were the only characters that had any really substance but I didn’t like either of them. Lucie was confusing. I felt like she had double standards. On the one had she wouldn’t admit that her mum was a Dark Magician and she wouldn’t help anyone from the Dark Side of New York because she was afraid of what would happen to her, but then a Doppelganger turns up and suddenly she’s putting herself into precarious situations for him…. She was constantly declarations her love for Ethan but she spent more time holding hands with Carwyn than Ethan… And then saying she felt in different to Carwyn… I couldn’t figure out what she was thinking or feeling. She was such a mystery!

Her Aunt was a lot more straight forward, I understood her actions and motivations. For me she was a breath of fresh air in a rather thickly woven story-line. She was bitter and twisted but she thought what she was doing was right. So much easier to understand than Lucie.

Tell the Wind and Fire wasn’t all bad though. I really enjoyed the last 3rd of this book. It was full of drama and tension. It brought characters together in a way that felt more natural. I felt them bond together as they tried to escape the chaos of the uprising, as they tried to save one another and I think it was in those moments that I started to really see Carwyn as something more than a one-dimensional character and I did actually feel something for him at the very end. But I don’t think this was enough to outweigh all my feelings of confusion and frustration up to that point. I really think the overall idea was amazing, it was sooo clever but, for me, the execution just didn’t quite work.