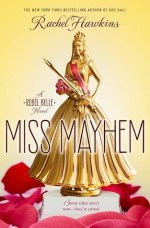 Aunt Jewel, I just told you that I have superpowers.
That my current boyfriend is an Oracle, and my ex-boyfriend is more or less a wizard.
And you want to do a little shopping?
I’d hoped you wouldn’t freak out, don’t get me wrong, but I expected some freaking out.
- Page 201

Life is almost back to normal for Harper Price. The Ephors have been silent after their deadly attack at Cotillion months ago, and her best friend, Bee, has returned after a mysterious disappearance. Now Harper can focus on the important things in life: school, canoodling with David (her nemesis-turned-ward-slash-boyfie), and even competing in the Miss Pine Grove pageant.
Unfortunately, supernatural chores are never done. The Ephors have decided they’d rather train David than kill him. The catch: Harper has to come along for the ride, but she can’t stay David’s Paladin unless she undergoes an ancient trial that will either kill her . . . or make her more powerful than ever.

So, I’m not a fan of the teen angst going on here and all the love triangle crap, I felt it really got in the way of the storyline. There’s also separation here – everything I have in sequels. There’s a lot of redemption needed in book 3.

I also felt that Harper was being a little more stupid than she was the first time around. There were a few times where I expected her to say something that she didn’t – for example when the school was on fire and the headteacher wanted her to go with him to his office – why didn’t she say “I can’t come with you to your office, the school’s on fire.” because I totally would have. There was another time she missed a witty quip and I was truly disappointed in her – but then I guess she had a lot on her mind. I’m also disappointed that she’s not always armed – I thought she was saying that she was earlier on in the book but turns out she wasn’t.
I’m 100% behind her choice though – but not the not telling perhaps – there must have been a way around that.

Harper is a fantastic character, it’s just those around her that seem to be letting her down. I just love the idea of a proper little miss suddenly pulling out a dagger and kicking butt. I’ve seen this compared to Buffy – and while it’s not exactly on the same scale, it’s certainly in the same league. I also think it would make a pretty good film set, if they just fixed all the needless drama…