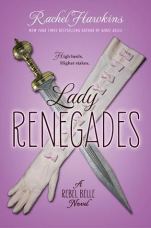 “You’re sure it’s David?”
“I mean, the girl was pretty clear about it, but, hey, maybe someone else is creating magically powered superhero girls? Who can say, really?”
“Right. Dumb question. Obviously it’s David, but why?”
- Page 31

From the  New York Times bestselling author of Hex Hall comes the sparkling finale in the beloved Rebel Belle series.
Just as Harper Price starts coming to terms with her role as David Stark’s battle-ready Paladin, protector, and girlfriend—her world goes crazy all over again.
Overwhelmed by his Oracle powers, David flees Pine Grove and starts turning teenaged girls into Paladins—and these young ladies seem to think that Harper is the enemy David needs protecting from.  Ordinarily, Harper would be able to fight off any Paladin who comes her way, but her powers have been dwindling since David left town, which means her life is on the line yet again.
Now, it’s a desperate race for Harper to find and rescue David before she backslides from superhero to your garden-variety type-A belle.
New York Times bestselling author Rachel Hawkins brings the fun once again in the finale of this pitch-perfect romantic paranormal comedy series.

I was meant to cancel this as I hadn’t read the other two, but I forgot, so I shoe-horned it into my schedule as punishment (haha) and I’m glad I did! This turned out to be a rather clever series. Book two sort of let it down a little but book 3 made up for it! It almost felt like book two was beaten into the middle-book-mould and it didn’t quite work but that by book three it was allowed to be itself again and it excelled. Surprisingly this was the shortest of the three books, which is odd. Often the last is the biggest. I do feel it could have been longer, I’d have loved a little more back story or filler about past oracles or a bit of a what-happened-next. Will there be any more? Will the knowledge die out? What?

Still unsure about how I feel about the ending, but that’s probably because I had to put it down at the most intense point possible and go to work. It was a little anti-climactic coming back to the story just before The Epic End completed. Sort of turned a 6 story drop into a small stumble. Because of this – or so I assume – the ending feels a little meh. THIS is what we were working up to?! What even happened here?

This series had some great characters and I felt a little like I was waiting for them to interact more, but they never did. I’d have liked to have seen an epilogue showing some of this, maybe a memory or two too…that would have been fantastic. But I still really enjoyed this series! I feel this would perhaps be more for mid teens, though the main character is 16/17 it seems like a comfortable read for those younger than this as well as older.