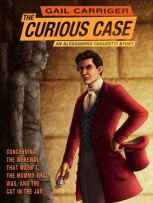 “It had three sets of invisible pockets in the lining, each housing a collection of sharp little sticks: silver, wood and peppermint.
The silver was for werewolves, the wood was for vampires and the peppermint was for Mr. Tarabotti.”
-19%

Title: The Curious Case of the Werewolf That Wasn’t, the Mummy That Was, and the Cat in the Jar
Author: Gail Carriger
Publisher: Gail Carriger LLC
Book: 0.5 Parasol Protectorate
Genre: Paranormal
Found: Series
Rating: 3 Voodoos

A short tale of mummies, werewolves, and well preserved felines set in the world of the Parasol Protectorate.

Alessandro Tarabotti and his valet, Floote, are on a mission in Egypt when they encounter visiting tourists and things go all pie shaped. What is his real mission and will his Aunt Archangelica approve of his treatment of her cat?

In this short story, New York Times Bestselling Author Gail Carriger uses her comedic voice to delve into the history of one of her most beloved characters. If you have ever wondered about Alexia’s father, this will give you a glimpse into his adventures and character. This story was first published in The Book of the Dead, a Jurassic London anthology. 8,300 words.

I was hoping for a little more to this to be honest, I got excited when Alessandro was a called Sandy, I thought you-know-who was showing up somehow/why. Unfortunately no. It was quite a short novella, but despite this it clearly shows exactly where Alexia gets her personality from, it’s fantastic!

I’d been too long since I’ve read the Parasol Protectorate really, but I vaguely recall that Alessandro wasn’t particularly nice. Though I was sure he worked for the crown – perhaps that happened later. I’m assuming that this is about him meeting his wife, but I forget Alexia’s mothers name. It’s also odd because, if my last sentence is correct, then this takes place no more than 20 years before the others, but when talking of Alessandro in the other books, it always seemed far further back, possibly because he was being discussed by werewolves and time always seems longer with them.

This book created a whole new question set though. Are you implying they died off?! This makes me want to see a book set in the past of this world all the more, before they died off and were forgotten and stopped living together or whatever it all was.

I’d recommend reading this after the parasol protectorate but not too long after that you’ve forgotten everything and so you miss all the secrets scattered about.