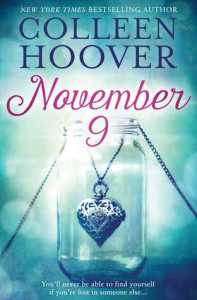 This is a love story between a guy (me) and a girl (Fallon).
I think.
Can it even be considered a love story if it doesn’t end with love?
Mysteries end when the mystery is solved.
Biographies end when the life story has been told.
Love stories should end with love, right?
Maybe I’m wrong, then. Maybe this isn’t a love story. If you ask me…I’d say this might even be considered a tragedy.
Whatever it is—however it ends—I promised I would tell it. So without further ado.

Once upon a time…I met a girl.
THE girl.

Popsugar Challenge #30. A book with a blue cover

So this is my second Colleen Hoover book and I must say I prefer this one. I tried the first instalment of Never Never but it didn’t really do anything for me, like at all! November 9 on the other hand, did.

November 9th was the date that Fallon’s life changed forever, leaving her with permanent scars that everyone could see. Scars that took away her career, her confidence and her love for everything. But November 9th was also the date that she met a stranger called Ben. A stranger who would change her life around and show her that her scars don’t matter, that she is beautiful and has everything to live for. November 9th will become a day she looks forward to rather than dreads and this stranger will become someone very special.

Every November 9th Fallon and Ben would meet up. They wouldn’t contact each other in between but meet up on this significant day in order to swap stories. As a writer Ben begins to write down what transpires between them as they continue on this strange but wonderful romance.

There were so many moments that I totally loved in this book. Like when Ben stood up to Fallon’s dad when he so carelessly told her that her career in acting was over. WHAT AN ARSEHOLE! Or every time Fallon and Ben gave in to their animal attractions for each other rather than over analysing it. Or when they shared those secrets with each other that had been weighing them down for so long. Sooo adorable (*sighs wistfully*) November 9 is definitely a book that gave me warm and fuzzy feelings on numerous occasions. But for ever moment I felt warm and fuzzy there was also a moment when I felt utterly devastated or overwhelmed with frustration. I can’t tell you how many times I was on the edge of tears for Fallon and for Ben, or how many times I screamed at their idiocy. It was an emotional roller-coaster, and for the most part I threw my arms up in the air and squealed with excitement.

Unfortunately there were other times that I just wanted off. For me, the fact that so much of the story was hinged on Fallon NOT listening Ben, was infuriating. If she had just stopped and listened rather than running away I’m convinced this story would have been half the length it was. I couldn’t stand the fact that she walked away knowing she wouldn’t get to sort things out for another year! Seriously??? I can’t even go to bed knowing an argument hasn’t been resolved! I don’t think I could have met up with her the following year, I think I would have given up, to much drama for me!

Another thing that I couldn’t quite ignore was when it felt like Colleen Hoover was telling me off. I did think it felt a bit like One Day by David Nicholls, but after Fallon went off on one about how its nothing like One Day, I kind of felt like a naughty child who should keep their opinions to themselves. I’m sure this wasn’t what Colleen Hoover intended but I just wanted to say that it made me feel a bit awkward.

These issues aside, I can definitely see why so many people love it. Its got all the elements of a good YA/NA Contemporary Romance matched with a writing style that’s easy to read. Definitely a writer I would like to read more from.