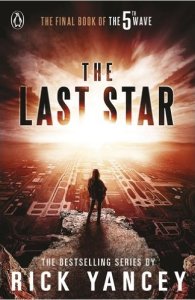 he Last Star is the heart-stopping finale to the bestselling 5th Wave series by award-winning author, Rick Yancey. Perfect for fans of The Hunger Games, Divergent and The Maze Runner.

But beneath these riddles lies one truth: Cassie has been betrayed. So has Ringer. Zombie. Nugget. And all 7.5 billion people who used to live on our planet. Betrayed first by the Others, and now by ourselves.

In these last days, Earth’s remaining survivors will need to decide what’s more important: saving themselves . . . or saving what makes us human.

I am so excited that it’s nearly May because that means I am one step closer to getting my hands on this final piece of the 5th Wave trilogy! I am so bloody excited it’s unreal. The 5th Wave had me so paranoid about everything! I couldn’t trust anyone! And The Infinite Wave had me all worked up and crying every other chapter. My emotions were EVERYWHERE! It was insane.

I’ve absolutely loved the series so far. I haven’t actually reviewed either of the previous two installments which is great! Cos now I get to re-read them!

LETS TALK 5th WAVE!!!
Have you read any of this series yet? What did you think? Have you seen the film? Is it worth watching?