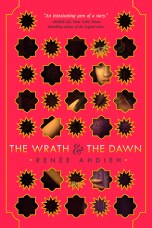 “He is quiet. But a man much wiser than I once said that the smartest men are the silent ones…because they hear everything”
- page 272

One Life to One Dawn.

In a land ruled by a murderous boy-king, each dawn brings heartache to a new family. Khalid, the eighteen-year-old Caliph of Khorasan, is a monster. Each night he takes a new bride only to have a silk cord wrapped around her throat come morning. When sixteen-year-old Shahrzad’s dearest friend falls victim to Khalid, Shahrzad vows vengeance and volunteers to be his next bride. Shahrzad is determined not only to stay alive, but to end the caliph’s reign of terror once and for all.

Night after night, Shahrzad beguiles Khalid, weaving stories that enchant, ensuring her survival, though she knows each dawn could be her last. But something she never expected begins to happen: Khalid is nothing like what she’d imagined him to be. This monster is a boy with a tormented heart. Incredibly, Shahrzad finds herself falling in love. How is this possible? It’s an unforgivable betrayal. Still, Shahrzad has come to understand all is not as it seems in this palace of marble and stone. She resolves to uncover whatever secrets lurk and, despite her love, be ready to take Khalid’s life as retribution for the many lives he’s stolen. Can their love survive this world of stories and secrets?

Inspired by A Thousand and One Nights, The Wrath and the Dawn is a sumptuous and enthralling read from beginning to end.

My first impressions of this book can be found HERE.

Not going to lie, I wasn’t particularly enamoured with this story right off the bat. At first I liked the prologue, but then I thought it didn’t help things with the story build because we knew something important!
I was also finding that Shazi crossed from strong and brave to bratty too much and at one point I was even tempted to put the book down – but honestly I didn’t have time to read something else for this review slot. I’m happy I kept reading because, hey 4.5 Voodoos!!

The story was set up so that something very predictable and awful could have happened – and if it had I might not have intended to read book 2, as it happens it really really didn’t happen and I’m so happy! I actually liked how things worked out between Khalid and Shazi. He most certainly is my favourite! and Shazi is growing on me. I just need her to grow a little and maybe save the world and she’ll be perfect.

Tariq is still of no interest to me, but I actually do hope that he listens to the truths he’ll be told and I hope that he grows as a character too. He’s started a ball rolling and I hope he regrets it. I hope he helps to stop it too. So far this storyline has scoffed at the stereotypes. I hope it does here too.

Of course if secrets had been shared from the start, this might not have all been an issue….

As always I want this to all have a happy ending!

Actually, speaking of endings – I was under the impression that this had a massive cliff hanger at the end. I am happy to report that it doesn’t really. At least, no more than your average first book in a series.