Top Ten Tuesday was created by The Broke and the Bookish in June of 2010 and was moved to That Artsy Reader Girl in January of 2018.
It was born of a love of lists, a love of books, and a desire to bring bookish friends together.
This weeks topic is a Top Ten Halloween Freebie. We’ve chosen Books We Wanted to Read for Halloween 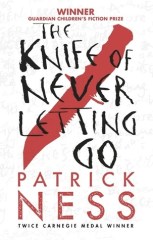 I mentioned this a few weeks ago. I’ve been in a bit of a slump recently so I haven’t read any of these books but I hope to get some of them read at least, through the beginning of November. I just need out of this slump. It’s a weird slump too.

Someone made comment about how this was a pretty good book for an October read so I added it to my list! I’ve forgotten what it’s about though. Perhaps that’s why I’ve been having trouble?

3 The Knife of Never Letting Go

I…don’t remember what this one was about either to be honest, again this was a recommended October read. Unfortunately though, I think it’s a little to involved for me right now – it’s part of a series, so I guess this one might be waiting another year!

by Emily A. Duncan

I’m still really excited for this one and perhaps I should have started with it – then I might have had more drive to read this month.

I started with this book and I got through the first part quite quickly, but Matthew was annoying me a little and then there where the general witch framing questions that were so manipulative I hated it, (that these were the actual questions used to frame women) that I haven’t yet picked the book back up. I should probably ‘pause’ it and move onto Wicked Saints or something and get out of this comforting-trashy-romance-slump I have found myself in. Not the stereotype for October…

4 comments on “Top Ten Tuesday: Books We Wanted to Read for Halloween”

Leave a Reply to Sammie @ The Writerly Way Cancel reply