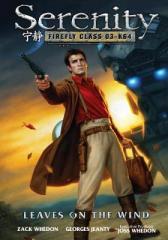 In the film Serenity, outlaw Malcolm Reynolds and his crew revealed to the entire ’verse the crimes against humanity undertaken by the sinister Alliance government. In this official follow-up, circumstances force the crew to come out of hiding, and one of their own is captured, setting them on another mission of rescue and resistance . . . Collects the six-issue miniseries and the 2012 Free Comic Book Day story.
- Goodreads

I was so excited for this book I actually had it pre-ordered for months. I was looking forward to a conclusion to the epic story that started in Firefly and travelled through Serenity. Instead I got this… Dont get me wrong, it was nice seeing some things work out, but really, some things needed more of an explanation. The return of old foes was rather a cheep way out and the new storyline was flimsy. Having so much content from both the series and the film to use, they rather flopped with this offering.
The drawing style is not one I like and perhaps this contributed to my dislike (certainly several characters were a good likeness but my two favourites were not amongst them), but while it would have been said to say goodbye it was certainly time and the cliff hanger ending was both and unexpected and unwanted attempt to milk stretch the franchise. As far as I’m concerned the story offering ended with the film.
As my friend says “Enough is enough now. I have other fandoms to obsess over.”