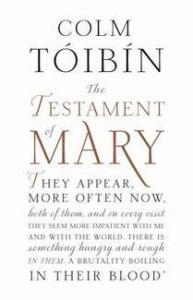 In a voice that is both tender and filled with rage, “The Testament of Mary” tells the story of a cataclysmic event which led to an overpowering grief. For Mary, her son has been lost to the world, and now, living in exile and in fear, she tries to piece together the memories of the events that led to her son’s brutal death. To her he was a vulnerable figure, surrounded by men who could not be trusted, living in a time of turmoil and change. As her life and her suffering begin to acquire the resonance of myth, Mary struggles to break the silence surrounding what she knows to have happened. In her effort to tell the truth in all its gnarled complexity, she slowly emerges as a figure of immense moral stature as well as a woman from history rendered now as fully human.

I received this as a present along with the 5 other books on the short list for 2013′s Manbooker Prize List and I picked this up now because I needed a book with less than 150-pages for my Popsugar Challenge 2016 and at 104 pages and a hardback I thought this fit the bill quite nicely. This isn’t my usual reading material but I’m glad I picked it up. It’s broadened my mind as well as my soul and given me plenty to ponder and reflect on.

I’ve never reviewed a religious-fiction book before and I’m finding it hard to decide where to start. Do I declare my faith? Well I suppose it wouldn’t hurt. I’m a Christian, a Church of England Christian at that. (No idea how that helps). I don’t actually know what the difference between the different factions are and I don’t really care. All I know is I believe in God, The Son and the Holy Spirit. I try to live a kind, considerate and loving life (something I believe everyone should aim for – whether they believe in God or not) and that I love to sing a good hymn or two. So with that in mind my views on this book may be different from those with other religious or non-religious beliefs but I hope people respect my opinion, as I respect theirs.

The Testament of Mary tells the story of the Crucifixion from Mary’s point of view. It’s powerful in the fact that its full of pain and anger. Every page exposes the grief, guilt and rage she feels over the lose of her son. She recounts her love for the beautiful baby boy she gave birth to and how he grew up into someone quite arrogant and distant. A man who is followed by flocks of men. Men she described as misfits. She reflects on how she worried for his safety as the Church and Romans began to watch him and those close to him. How she tried to pull him back and quieten him but to no avail. She tells of how she found out he was to be crucified and how this angered her and upset her. And how she witnessed his death. It’s all explained in vivid descriptions but with an air of distant reflection due to her tiredness and grief, at the end of her life and she lays bare how guilty she felt for fearing for her own life at the time her son was suffering the most. The disciples and Jesus don’t come across very well in this novella. They appear delusional and forceful as they try to push their stories on everyone. It was difficult to see them that way but saying that, I still felt that Colm Toibin spun this tale with great respect for the beliefs of others. The main focus of this story was the concept that, for Mary, as a mother, the lose of her son was not worth the changes that were promised in society.

The novella didn’t quite feel as though it was set at the right time. Not quite modern but more modern than Biblical times. And it came across as though Jesus was an only child, which for the time, would have been strange. People tended to have large families, like Jacob and his many sons. And I didn’t really get a sense of time or place from anything else. But then, was it really important? Not really. The feelings and thoughts of Mary were the focal point of this story and no one can deny that this wasn’t absolutely full of it!

I’m grateful to have read someone else’s interpretation of the bible because it gave me the opportunity to consider my own understanding of it and broaden my views. It’s been amazing to discuss with my family at any rate.