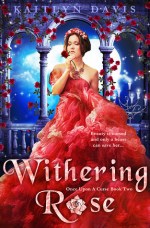 Thank you to Netgalley and the Publisher for the chance to read this book in exchange for an honest review.
Publish Date: 17th May 2016

What if Beauty was cursed, and the Beast was the only one who could save her? Don’t miss WITHERING ROSE, a dystopian romance from bestselling author Kaitlyn Davis that reimagines the classic fairy tale of Beauty & The Beast.

“As the heat finally disappeared, I felt the bloom blossom in the very core of my soul, a rose just like my name–a ticking clock hidden behind a façade of beauty. From that moment on, my life would become a countdown, and all I could do was wait and watch as the petals of time slowly started to fall.”

Omorose Bouchene has a secret–magic. There’s only one problem. At the age of seven, an earthquake struck, catapulting her into a new world. A land made of skyscrapers and cell phones. Fast cars and fluorescent lights. A land where magic isn’t supposed to exist and anyone who wields it is the enemy.

But after ten years of hiding, she’s desperate to find a place where she can be free. Because all magic comes with a curse, and her curse is time–every ounce of power she uses strips days off of her life. The clock is winding down, and the only option left is to escape to the realm of the Beast. But the king of monsters isn’t what he seems. And the more Omorose opens her heart, the more she comes to realize that the only person she may need to fear is herself.

*This is the second book in Once Upon A Curse, a series of interconnected stand-alone novels all set in the same fantasy universe.

LOVED the story idea. REALLY didn’t get on with the writing style at all though. It was almost like it was trying too hard and it was really missing what it was going for, but I was determined to read this book and I was sort of ‘flipping through’ from about half way onwards and it actually worked out well, I missed the eye rolling parts – or they got better, who knows?

Yes I know this is a book 2. Yes I know I didn’t read book 1 first, but see that line up there ^ ? The one that says ” *This is the second book in Once Upon A Curse, a series of interconnected stand-alone novels all set in the same fantasy universe. ” Well, I read that and I believed it and it LIES! The characters from book 1 turn up and I had no idea who they were or anything. You might want to read it first. And book 3 sounds like it should be good too! I might just have to investigate them! Once I forget how badly I got on with this writing style that is.

Why do I want to continue with a series whose writing style sets my eyes rolling? Because the idea of it is absolutely fantastic! A backwards beauty and the beast! A smoosh up of our world and a fairytale world! A dark secret that many in the land had forgotten about! I need to know what happens and how everything turns out and why everything broke, except the things that didn’t.

I’m sad to say found Omorose rather annoying and her life was a little cliche and annoying, but apart from that, the storyline seemed to be sticking pretty close to the disney film for a while there and I thought were were going to have a Gaston type, which we almost did, except we didn’t. But Cole was fantastic. A little more character developing may have done him good, but he was a pretty decent character with what we were given and most certainly my favourite.

A thoroughly unique look at an old favourite fairytale. I’ve got book one waiting for me on my kindle app, perhaps a summer read?