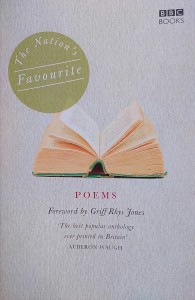 Popsugar Challenge #31. A book of poetry

I have never read a poetry book in my life but thanks to the Popsugar Challenge I have now! At school we would study a piece of poetry to death and because of this, I never really got the beauty of just reading poetry. This anthology had a few poems I didn’t really get but on the whole I enjoyed the variety and the messages they conveyed. I suppose that’s the bonus of reading a public voted list of the top 100 poems, you’re bound to like the majority of them otherwise they wouldn’t be popular!

This Anthology was collated after the BBC ran a programme for National Poetry Day 1995, entitled ‘The Bookworm’. The foreward was written by Griff Rhys Jones who points out that the clear overall mood of the poems chosen is ‘wistful’ and ‘yearning’. I must say I agree, however there was a nice balance with some of the more woeful poems thrown in, it brought a somber edge to this collection. I wasn’t surprised to find that few of the top 100 were written by modern poets, or ‘living’ poets. But I was surprised to find that many of the favourite modern poems were by females poets. This collection included an additional poem, ‘Do Not Stand at my Grave and Weep’, it was by far the favourite but because its Anonymously written it couldn’t be placed in this collection.

I personally found I recognised quite a few of the top 50, which was a suprise to me, because I thought I really didn’t know any poetry. Some of my favourites included Rudyard Kiplings ‘IF’ (no surprise this had the #1 spot) and Edward Lear’s ‘The Owl and the Pussy-Cat’ which came in at #45. There were poets I’d heard of that I found I rather liked, such as Wordsworth and W B Yeats but also quite a few that I had never heard of that I will definitely read more of in future, these included Walter de la Mare, John Betjeman and Jenny Joseph.

There is one author that moved me more than I would ever have thought was possible with poetry and that award goes to Wilfred Owen. My heart breaks even to think of his poems and how a man so young could have seen and written of so much pain and despair, and died so young never to have the chance to see the good and beautiful side of life!

There were some poems I didn’t really enjoy but only one poet I’m afraid that did nothing for me AT ALL, and that was John Keats. Sorry lovers of John Keats but nah, not for me.

I think, (other than Wilfred Owens poems obviously) that there are two poems that stand out for me in this collection and they were John Betjeman’s ‘Diary of a Church Mouse’ which came in at #62 and Michael Rosen’s ‘Chocolate Cake’, #96. Both of these were just soo hilarious and they made me think of ordinary things in a different way.

All in all a wonderful collection, one that has inspired me to give poetry more thought in the future.