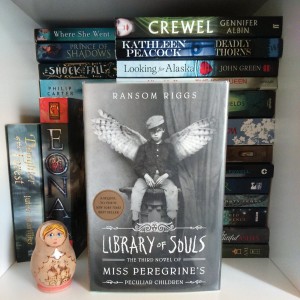 A boy with extraordinary powers. An army of deadly monsters. An epic battle for the future of peculiardom.

The adventure that began with Miss Peregrine’s Home for Peculiar Children and continued in Hollow City comes to a thrilling conclusion with Library of Souls. As the story opens, sixteen-year-old Jacob discovers a powerful new ability, and soon he’s diving through history to rescue his peculiar companions from a heavily guarded fortress. Accompanying Jacob on his journey are Emma Bloom, a girl with fire at her fingertips, and Addison MacHenry, a dog with a nose for sniffing out lost children.

They’ll travel from modern-day London to the labyrinthine alleys of Devil’s Acre, the most wretched slum in all of Victorian England. It’s a place where the fate of peculiar children everywhere will be decided once and for all. Like its predecessors, Library of Souls blends thrilling fantasy with never-before-published vintage photography to create a one-of-a-kind reading experience.

Library of Souls is an exciting, fast-paced, action-packed finale to the Miss Peregrine’s Peculiar Children series. I’ve not been the biggest fan of this series really, with books one and two only receiving 3 stars each, but there was always something immensely intriguing that had me returning for more and I’m really glad I did. Book 3 is the best of the lot. It pulls everything together and answers all the questions that have been plaguing me from the very beginning whilst sticking to it’s quirky, ‘peculiar’ ethos.

I think I was quite lucky to have read these books all quite close together because they jump straight back into the story each time. At the end of Hollow City we left the characters in a state of chaos. With Wits grabbing many of the peculiar children and forcing them onto an underground train in current day London and Jacob, Emma and Addison ending up cornered in a phone booth by a ravenous Hollow. A Hollow that Jacob has somehow been able to freeze just by telling it too! Jacob has finally discovered a very usual side to his peculiar talent, (the one that allows him to tell whether Hollows are near by). Jacob can control Hollows! But like all talents he needs practice and he doesn’t have long to master his skill.

Just like the previous two books, Library of Souls is strange, full of weird and wacky places, happenings and pictures! I personally, have struggled with the pictures, finding them interesting but feeling that sometimes they felt a little forced in just to make the story even more bizarre. Library of Souls was probably the first time that I didn’t mind the oddness of the pictures. I finally stopped questioning everything and just enjoyed the ride. I think I did this because I knew that answers and explanations would have to be given in this book otherwise it would never happen.

We met a few new characters that aid and hinder our main characters, Jacob and Emma, and as per usual not everyone should be taken at face value, you have been warned! Jacob, Emma and Addison travel across London in the search for their friends. They take a boat through time to a loop that’s full of criminal peculiars and with help, plan an elaborate rescue attempt. It’s much more complicated than that but you get the idea. I can only compare the antics in this series to Lewis’ Carroll’s, Alice in Wonderland, because it’s totally nuts, seems like complete gibberish most of the time and yet some how creates a fascinating and twisted tale that has you glued to your seat! I don’t want to give too much of the plot away but the ending was intense, so much happened and so much finally made sense!

In the end all I can say is, if you’ve stuck with this series up till now, then you won’t be disappointed by this final installment. It’s fun, it’s bonkers but most importantly, it’s complete. Thanks Ransom Riggs for truly messing with my mind!