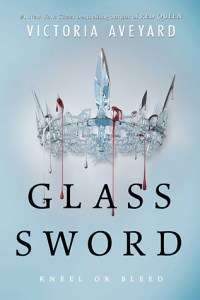 I’m really torn with whether I liked or disliked this book. My eyes hurt from rolling so much, my teeth hurt from grinding so much and yet some how I can’t help but feel a little bit excited by the events that happened in this book.

Glass Sword throws us straight back into the action of Red Queen, with Reds and Silvers fighting to destroy the other. Mare and Cal, with the help of the Red Guard, are trying to escape the clutches of the Silvers and the Mad ‘Would-be-King’ Maven. His lies have spread and everyone is now hunting for Cal ‘The King-Killer’ and Mare ‘The Imposter’. It is messy and chaotic but somehow they escape only to find themselves on an island of Reds who are suspicious of these new comers.

With the help of Kilorn and Farley, Mare and Cal go on a quest to save as many New-Blood (Red-Silvers) as they can before Maven wipes them out! But in a world in chaos ‘anyone can betray anyone’.

I didn’t like Mare much in Red Queen and I don’t think she’s improved in Glass Sword. She was so unreliable, so confusing, and constantly whined about how hard her life was. It was so frustrating to read.  I especially didn’t like her confusing feelings for Kilorn and Cal. It was like Katniss with Peeta and Gale all over again. STOP IT! I don’t care! And add in her lingering feelings for who Maven was and you have me wanting to through this book out the window! Mare was quick to blame herself for anything that went wrong but if someone else blamed her for something, she acted all offended and hurt. Why? Mare made stupid decision after stupid decision and I found it very hard to feel sorry for her.

While I may have hated Mare, I loved the myriad of other characters. I liked that Kilorn, Shade and Farley were given more of a storyline and played massive roles in this book. I loved getting to know all the talents of the other New-bloods and watching them step up to help others like them. There was always a great team spirit, although Mare seemed to try to distance herself from them all the time and then say how they feared and disliked her – ermm try harder maybe???

There was a continuous fear that they would be caught again, thorough-out Glass Sword. There were a number of close calls which allowed us to see the pure evilness of Maven and the Silvers he led. All these near misses really built up the tension and you could just feel something big on the horizon. Something really big!

The ending is explosive! It had me on the edge of my seat and trying to read through the tears. It was amazing! It’s left me broken and confused and I have no idea where this series will go next but I know, I have to find out. I need book three! If I was to complain about anything it may be that I felt it was over to quickly, but maybe that’s just me. It felt like I blinked and missed it, it was that quick.

In the end I think this was a good sequel to Red Queen but it’s definitely got the ‘middle book’ vibe to it and a massive cliff-hanger ending. It could go either way from here.