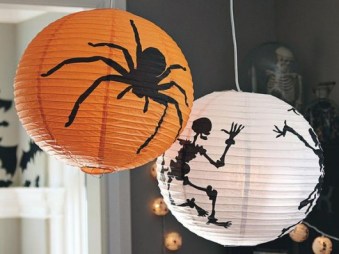 A nice simple one this week people, my originally planned book themed make it became a Christmas one and it’s far too early for that kind of activity.
Luckily I had a backup ‘cooking’!

So, if you remember my cloud light involved a paper lantern. I couldn’t just get one and the first lot I got were too big so I’ve had a bunch of paper lanterns gathering dust. I realised that they would be perfect for some craft sessions and gave them to the individuals involved, but people always like a visual so I kept two back to make examples. I wish I’d kept more because there are so many different designs you can make! Pumpkins, Ghosts, Mummies, Monsters (purple) Frankenstein’s Monster (green) etc etc etc.

I chose to make an evil ghost and a happy pumpkin.Or at least that was the plan.

First off, put up your lantern and choose your orange. I tried to darken a pale orange and while it was alright for an orange it wasn’t a pumpkin colour, so I dug a jar of orange I made last Halloween and made it darker. Too dark incidentally as I ended up trying to pale it out with some yellow, now I have a WHOLE jar of orange and no use for it. I’ll send it the way of the paper lanterns… Once the lantern’s two coats of paint had dried I did a rough sketch of the face I wanted because I need guidelines. I think my guidelines needed guidelines too to be honest, but we don’t have that kind of time. Then I painted then in black, it only needed one coat which I was pleased about. 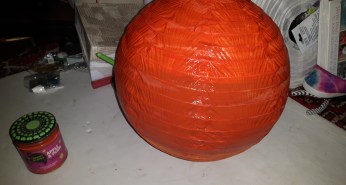 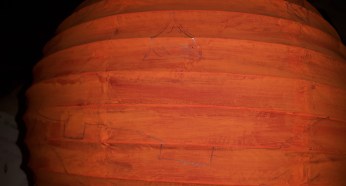 However when I tried drawing guides on the unpainted white lantern, the pencil didn’t show up. I could have got up off the floor to get and try one of my 6B’s, but that really didn’t cross my mind in all honesty, I was panicking about having to free hand with paint! 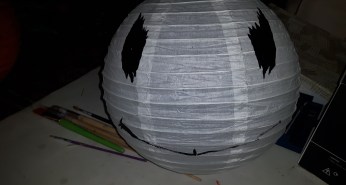 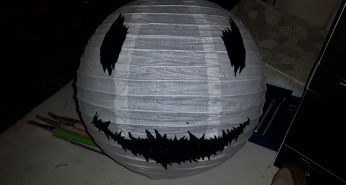 Having created a spiky smiley face, I made the points bigger and fatter, I think the skinny ones are scarier, but working out how to make them bigger but still skinny wasn’t really something I felt like doing, mainly because I’d had enough of sitting on the floor by this point and my leg had pins and needles but also because I didn’t think I’d do so well with that with what I already had going on and once I’d started I’d paint the whole thing black before admitting defeat, so a slightly scary ghost it is. 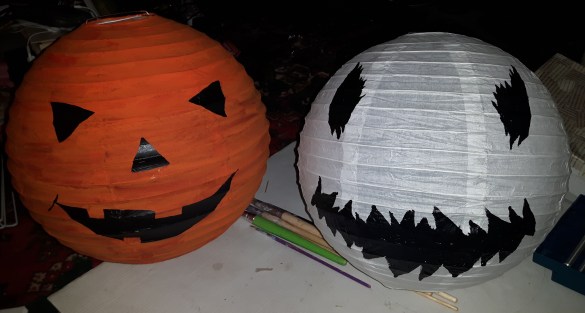 Painting the lanterns gives it a better base for anything else you do, picking the colour to paint it before you start prevents patchy areas…
Maybe a template and a softer pencil for any future lanterns.
This was actually pretty fun and quite easy! The faces require precision of course so it could be difficult for children unless you cut and stick black paper on.
Huh, now that’s an idea…