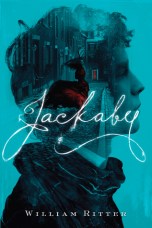 “Miss Rook, I am not an occultist,” Jackaby said. “I have a gift that allows me to see truth where others see the illusion–and there are many illusions. All the world’s a stage, as they say, and I seem to have the only seat in the house with a view behind the curtain.”

Ms4Tune recommended this book to me and I can see why it’s been described as Doctor Who meets Sherlock, It’s not quite on the same level, bit it’s got a similar feel. A terribly-clever-rush-about with a notices-the-important-little-stuff assistant.

I’m glad I chose to read this book, because even though it was just a little bit predictable – the who if not the what – it was quite entertaining and quite a good book to be reading during the ‘awake in the middle of the night cause I’m sick’ phase I was going through the other night. It’s got such potential and I can’t wait to see if it will live up to it (please do! – you require more witty one liners though, please)

I enjoyed the introduction this book gave us to these characters and I’m hoping they will all return in the sequels. I think my favourite character is Charlie, though Douglas is also interesting despite knowing as little as we do about them. As we’re following Abigail Rook around, she’s the character we know the most about but honestly we don’t really know that much of her. The entire book seems to be over less than a week.

I liked William’s writing style and found the whole affair smooth and immersive. While it didn’t grip me and keep me from putting it down, it also didn’t make me resent picking it up again which is a nice type of book to come across now and then. It didn’t keep me up at night, but it kept me company when I was up at night.

I liked that the supernatural element was previously (mostly) un-visited creatures. Something new is often of interest, especially as all of the ‘popular’ ones are sadly well and truly overdone. when done well and this was done well indeed. I can’t wait to see what is in store for us next.