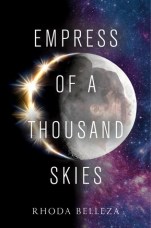 “If all we are is what people think we are, then we’re all screwed.”
- Empress of a Thousand Skies

CROWN PRINCESS RHIANNON TA’AN WANTS VENGEANCE.
The only surviving heir to an ancient Kalusian dynasty, RHEE has spent her life training to destroy the people who killed her family. Now, on the eve of her coronation, the time has finally come for Rhee to claim her throne – and her revenge.
ALYOSHA is a Wraetan who has risen above his war refugee origins to find fame as the dashing star of a DroneVision show. Despite his popularity, Aly struggles with anti-Wraetan prejudices and the pressure of being perfect in the public eye.
Their paths collide with one brutal act of violence: Rhee is attacked, barely escaping with her life. Aly is blamed for her presumed murder.
The princess and her accused killer are forced to go into hiding – even as a war between planets is waged in Rhee’s name. But soon, Rhee and Aly discover that the assassination attempt is just one part of a sinister plot. Bound together by an evil that only they can stop, the two fugitives must join forces to save the galaxy.
In this exhilarating debut for fans of Marissa Meyer’s Lunar Chronicles and Pierce Brown’s Red Rising trilogy, RHODA BELLEZA crafts a powerful saga of vengeance, warfare, and the true meaning of legacy.

I recieved this book in the February Fairyloot box.

Just, FYI – what the blurb basically tells you is going to happen doesn’t actually happen. But at the same time something I was expecting to happen DID – just not the way I expected…

I don’t think I liked this book much. I LOVED the idea but I spent too much time confused to really enjoy it.
One chapter in particular had me confused as to when and where it was as well as what was actually happening!
Not sure if part of that is because IU was reading it fast to fit it into the month, but I definitely considered giving up on it.  Especially as the ‘big reveal’ was too obviously laid out in advance.

I have to admit though, it got more interesting towards the end and I do think I’ll maybe consider reading the next book. I hope this is a duology – it feels like it should be a duology. , it has the right tone.

This book switches between the POV’s of Aly and Rhee. I was a little confused with the politics going on in this world, mainly I think because I wasn’t paying attention, but I think that though they’re both called different races they both are essentially human. Aly had the feel of Fin from Star Wars for me and the basic plan of this book called to mind The League series by Sherrilyn Kenyon – I’m well behind with it, but I remember a princess type ‘disappearing’ and I really enjoyed the start to that series.

The book refereed to the main characters and boys and girls. So I was really creeped out when Aly was admiring Kara’s neck. She’d just been introduced as a girl, doing what she was doing and I assumed she was around 10! But turns out she’s probably over 18! That was weird and annoying and I really didn’t like it.

I think that if I do end up deciding to read book 2 I’ll re-read this one more slowly first. I will most certainly require re-reading this one – I generally do and it mean’s I’ll cover any bits I missed in my rush. Sometime I miss chunks of description when the story is getting boring or I’ getting impatient! I’ll also read the key at the front next time too…