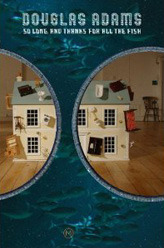 “His name was simply John Watson, though he preferred to be called – and some of his friends had now reluctantly agreed to do this – Wonko the Sane.”
-Page 73
(Particularly notable quote as MARTIN FREEMAN was the narrator, haha)

Title: So Long, And Thanks For All the Fish
Author: Douglas Adams
Publisher: Pan Books
Book: #4 of The Hitchhikers Guide To The Galaxy.
Genre: Sci-Fi
Found: Series
Rating: 3 Voodoos

Back on Earth with nothing more to show for his long, strange trip through time and space than a ratty towel and a plastic shopping bag, Arthur Dent is ready to believe that the past eight years were all just a figment of his stressed-out imagination. But a gift-wrapped fishbowl with a cryptic inscription, the mysterious disappearance of Earth’s dolphins, and the discovery of his battered copy of The Hitchhiker’s Guide to the Galaxy all conspire to give Arthur the sneaking suspicion that something otherworldly is indeed going on.

God only knows what it all means. And fortunately, He left behind a Final Message of explanation. But since it’s light-years away from Earth, on a star surrounded by souvenir booths, finding out what it is will mean hitching a ride to the far reaches of space aboard a UFO with a giant robot. But what else is new?

I was not expecting this.
Don’t assume that as this is a Hitchhikers Guide book that it’s perfectly save to listen to on loud speaker, cause this one has some surprises.
Cause I did! Luckily no one was around…

I actually enjoyed some of this story quite a bit. The silly linking up and stuff, like the rain God and things. But it almost felt like it was trying to be different to the others and that I didn’t like. I mean three was WEIRD, but then I was also shovelling snow and really rather distracted so maybe it wasn’t as weird as I remember but four didn’t need to do this. Or wasn’t it quite as I remember because I was doing stuff again?

I’m going to say it again because it’s true, but Martin Freeman is the best narrator, he pulls off all of Arthur’s weirdness perfectly and really just makes the whole thing I think.
Though that might  be because he played him in the film and I can imagine his facial expressions to go with the words and it’s great.

In this instalment an interesting development happens – Arthur gets a girlfriend! Wait, what? What about Trillion? Well you’ll need to read/ listen to the books won’t you.
Oh, yeah. The dolphins have left and have sent a select few people a leaving gift.
How did they know who to send them to?! Is that something I’ll find out in the next book? And where have they gone?!

Anyway, then Ford Prefect turned up and everything got even better. And by better I mean weirder, because I have no idea what he was doing before that and I really think I need to listen to these again sometime when I’m not doing lots of stuff. But his conversation with Arthur was the best.

I think these are definitely worth a read or a listen if you like things to be a little weird.
And by a little I mean a lot.
But they’re a good laugh and I do recommend them.