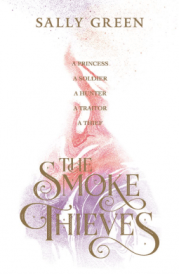 Thank you to Netgalley and the Publisher for the chance to read this book in exchange for an honest review.
Publish Date: 3rd May 2018

The first book in the new historical fantasy series from the author of Half Bad** A princess, a traitor, a soldier, a hunter and a thief. Five teenagers with the fate of the world in their hands. Five nations destined for conflict. In Brigant, Princess Catherine prepares for a political marriage arranged by her brutal and ambitious father, while her true love, Ambrose, faces the executioner’s block. In Calidor, downtrodden servant March seeks revenge on the prince who betrayed his people. In Pitoria, feckless Edyon steals cheap baubles for cheaper thrills as he drifts from town to town. And in the barren northern territories, thirteen-year-old Tash is running for her life as she plays bait for the gruff demon hunter Gravell. As alliances shift and shatter, and old certainties are overturned, our five heroes find their past lives transformed and their futures inextricably linked by the unpredictable tides of magic and war. Who will rise and who will fall? And who will claim the ultimate prize?

I really enjoyed reading this book. I loved finding out about the world this was set in – well, except for one of the countries, for the thoroughly ridiculous way the women were treated there. But I feel change is afoot and hopefully that will get sorted out by the end of the series.

This book is told from 4 points of view (pov) to start and a 5th is added a little further in, when it becomes relevant. I really liked watching this one meet that one and the other one come along and totally miss them and how they all converge – because you know they were going to, that’s not a spoiler…right?
I liked it when some of them were together and we saw the same event from multiple angles because that’s my favourite thing ever.

I liked the character development of Catherine and March. I look forward to seeing more of it in book 2. They’re the most different from the start of the book than any others. I’m not an Ambrose fan, because I like who Catherine is becoming without him and I want her to marry the prince! Because they never do.
I hope March follows through on his promise quickly and I hope it goes down the better way (these things always go the bad way, it’s frustrating) – a throwaway line will hopefully be remembered and is possibly highly important!!! So hopefully that will impact the promise too. Is that vague enough to make sure you have no idea what’s going on?
I hope so.

I’d like the POV of the prince in the next book too!
I mean, obviously these are the important folk, the ones who are going to change the world or save it or rule the ashes or whatever, but I’d like a POV from him.
And, while I don’t really want one from Catherine’s family at the same time I do because I’d feel anxious about what they are getting up to…

How long do I have to wait for book 2?!
It’s not even mentioned as ‘untitled’ on Goodreads!!