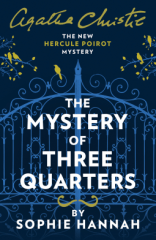 Thank you to Netgalley and the Publisher for the chance to read this book in exchange for an honest review.
Publish Date: 23rd August 2018

The world’s most beloved detective, Hercule Poirot – the legendary star of Agatha Christie’s Murder on the Orient Express and most recently The Monogram Murders and Closed Casket—returns in a stylish, diabolically clever mystery set in 1930’s London.

Returning home after lunch one day, Hercule Poirot finds an angry woman waiting outside his front door. She demands to know why Poirot has sent her a letter accusing her of the murder of Barnabas Pandy, a man she has neither heard of nor ever met.

Poirot has also never heard of a Barnabas Pandy, and has accused nobody of murder. Shaken, he goes inside, only to find that he has a visitor waiting for him — a man who also claims also to have received a letter from Poirot that morning, accusing him of the murder of Barnabas Pandy…

Poirot wonders how many more letters of this sort have been sent in his name. Who sent them, and why? More importantly, who is Barnabas Pandy, is he dead, and, if so, was he murdered? And can Poirot find out the answers without putting more lives in danger?

I was half way down the first page when I realised I’d never read a Poirot book, so there’s a large chunk of review that that I can’t actually write.
How good is Sophie Hannah at writing Poirot?!
How well do these new mysteries match the originals?
Are these newer books in keeping with the older ones?

I am curious about the answers to these questions, but full out mysteries are not usually something I find truly entertaining to read – I tend to prefer them to have something extra in the mix, some fantasy, romance or even a little something paranormal. Even so, I was pretty excited when this showed up in my emails as I do like a good [David Suchet] Poirot episode!

I was disappointed to see that some of the familiar faces I was expecting were not there! Apparently he ‘retired’, but cameos would have been nice! But then I guess this IS book 3! It just seemed a little odd with only Poirot, like he was on holiday or something.

I liked the idea of this book, with the letters from Poirot that Poirot did not write! It was a good premise. How the characters matched up and didn’t match up was pretty interesting too.
As always, of course, the murderer was not nearly as clever as they thought!
OR…was there a murderer at all?!

The cake subplot was confusing. It seemed really random and hard to picture. All I could think of was a battenberg – is that what they were talking about?!

I will certainly consider reading another Poirot – maybe an original – but this time I will read a paper copy so that I can flick through the slower parts.