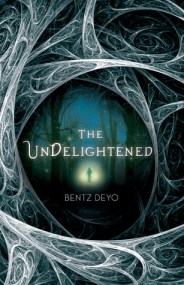 His brother’s seventeenth birthday and the eve of his own eighteenth caps the worst year of Leam Holt’s life, marking the year anniversary of his failed delightenment – the magic bestowing rite all children of Darkness go through in order to join the war against Light. Topping it off, insufferable Zach, his brother, is about to go through his own delightenment rite, much to the glee of his horrid step mother.
The evil leader of Darkness is the one to preside over Zach’s ceremony, but instead of ignoring Leam like his family does, Gideon pays close attention, ordering Leam into a series of mysterious trials, giving him hope of the future. But there’s more going on than Leam can ever comprehend. Is it merely coincidence that the girl he just can’t stay away from belongs to the Light? And what happens when they touch? As secrets from both sides begin to be revealed to him, Leam realises that events are escalating and that he may have more to lose than anyone else.

Not going to lie, was very tempted to put this one down but a tiny sliver of curiosity kept me going. Glad I did, though annoyed it turned out to be part of a series, nothing indicated that when I bought it. Or added it to goodreads. Or started to read it. My one clue was that at 94% too much needed to go on before the end, as well as the end of course. Which just happened to be right bang in the middle of the most interesting part, dammat.

Some of the descriptions were deliberately vile, I will warn you, while describing areas pertaining to the Darkness as well as its members, without corresponding descriptions of the Light. But then isn’t always Light’s problem? It’s easier to attack anyone than protect everyone.

This book would have scored higher Voodoos had the book captured me more in the first half, it could have done with something to suck you in, as it was it was past 55% before things really picked up and got going. Hopefully the pace of book 2 will keep going from where 1 finished off and just keep snowballing. And I really hope that it doesn’t all get dragged out which a popular stunt these days.

Looking forward to book 2 and the conclusion of Leams adventures. Go get that girl, boy.