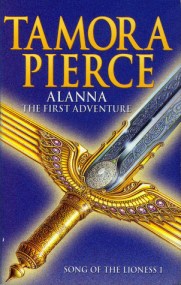 “I’m sorry,” she said humbly. “I haven’t wanted to lie to you.”
“I should hope so. You’re the worst liar I’ve ever met.” He thought about it for a moment, then added, “–or the best. Now I’m all confused.”

From now on I’m Alan of Trebond, the younger twin. I’ll be a knight.

And so young Alanna of Trebond begins the journey to knighthood. Though a girl, Alanna has always craved the adventure and daring allowed only for boys; her twin brother, Thom, yearns to learn the art of magic. So one day they decide to switch places: Disguised as a girl, Thom heads for the convent to learn magic; Alanna, pretending to be a boy, is on her way to the castle of King Roald to begin her training as a page.

But the road to knighthood is not an easy one. As Alanna masters the skills necessary for battle, she must also learn to control her heart and to discern her enemies from her allies.
Filled with swords and sorcery, adventure and intrigue, good and evil, Alanna’s first adventure begins – one that will lead to the fulfillment of her dreams and the magical destiny that will make her a legend in her land.

I don’t remember the first time I read this book, but I do remember that I borrowed it from the library and my first copy was an ex-library copy. I was a young teen and I’m sure that this book is perhaps the one the solidified my love of fantasy adventure stories. And I have gobbled up every book by Tamora Pierce ever since.
Recently, while comparing another book to this one, it came to my attention that this is in fact a mulan story! Who knew? Apparently everyone but me…
I’m sure while reading this the first time I would have wished to be right there along with Alanna, mainly because I’d like to be there every time I read these books…
I felt that this book was a magical introduction into a world where, though women had become perceived as ‘less’, one girl refuses to accept this and swaps place with her twin brother so that she could live out her dream and in so doing she helped her brother reach his as well as changing the entire country and surround.
She becomes such an important person within her role that I can’t help but wonder how messed up their world would have been if she’d not followed this path, or if everything would have worked out alright in the end?