by Various (edited by Malorie Blackman) 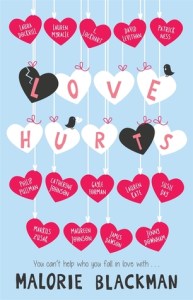 Note: Only 7 out of the 24 are original shorts.

This was a long and sometimes arduous read. It was such a mixed bag of stories and like most anthologies there were some that I enjoyed and others that I really didn’t. The overall theme, LOVE, worked well however I wish there had been more of the full short stories and less excerpts. Sometimes it was hard to jump from one author’s writing style to another and so it took me a long time to read through all of it. But there was plenty of variety in the stories and I never thought two were so alike that I got confused, which can happen with some anthologies.

I loved that this anthology introduced me to a few new authors that I’d never heard of, such as Non Pratt and Lauren Myracle, (both of who’s books I have now ordered) and some authors I had heard of but not yet read, that now I can’t wait to read, such as David Levithan. Unfortunately there were some books that I don’t really want to read now, that I previously thought I did… such as We Were Liars by E Lockhart and Junk by Melvin Burgess. So in a way that was a little disappointing but I’d rather have read those excerpts than struggle with the book.

In the end this was an ok anthology but I personally would have liked to see a few more new works from these amazing authors rather than excerpts from work that we already know.

This book will be published on the 29th of January 2015