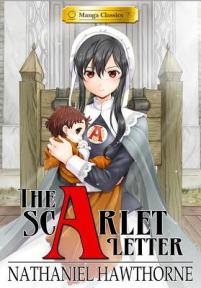 A powerful tale of forbidden love, shame, and revenge comes to life in Manga Classics: The Scarlet Letter.

Faithfully adapted by Crystal Chan from the original novel, this new edition features stunning artwork by SunNeko Lee (Manga Classics: Les Miserables) which will give old and new readers alike a fresh insight into the Nathaniel Hawthorne’s tragic saga of Puritan America.

Set in the harsh Puritan community of seventeenth-century Boston, this tale of an adulterous entanglement that results in an illegitimate birth reveals Nathaniel Hawthorne’s concerns with the tension between the public and the private selves. Publicly disgraced and ostracized, Hester Prynne draws on her inner strength and certainty of spirit to emerge as the first true heroine of American fiction. Arthur Dimmesdale, trapped by the rules of society, stands as a classic study of a self divided.

Taken from The Scarlet Letter, -Goodreads

I’ve had the kindle version since 2010. The film Easy A (if you’ve never seen it, stop now and go watch it. It’s a favourite!) is based on a girl who is studying the book in her classes and ends up adopting the Scarlet A for various reasons explained in the film. I’m always interested in books or songs or films mentioned in any of the previous, but I have a bad track record when it comes to reading classics and to be honest I never actually tried to read this one, expecting to fail but hoping not.

So, naturally, when I saw the manga on netgalley, I was excited. A way to read the classic that would keep me interested! And, lets be honest, would take no more than an hour or so.

I’m not sure if I should be reviewing the fact it’s a manga or the story itself because I feel they are separate. Some information may be lost in the translation of the story to a manga, or at least I assume so, having never read it, but at the same time, far more could be said far more quickly and certainly, it’s a perfect way to tell the story for those interested and yet not quite able to read the book.
The art work was beautiful, I like my manga artwork to be pretty and this certainly fulfilled that requirement.I don’t now, I certainly think it affects my enjoyment of the book.

As to the story, that’s harder for me to review, but as this is it as an ADAPTATION to  MANGA, then that is what I am focusing my review on. So, to conclude, I feel this is an exciting and very clever way to tell the story, for those whose attention wonders but also for those who struggle with many words. Truly, a picture can say a thousand words.