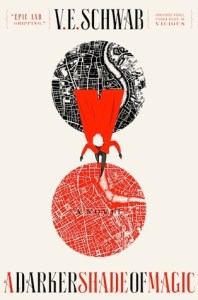 This is my Magic choice for the 2015 Reading Challenge.

Sooo ermmmm I was supposed to be given a sneak peek ie 150 pages of A Darker Shade of Magic.

After 5 hours of reading and 87% showing in the corner of my screen, it finally occurred to me that perhaps what I had actually received was possibly more than the initial 150 pages.

I HAD THE FULL VERSION!!!! I AM SO SO HAPPY! IT’S BLOODY BRILLIANT!

Kell is one of the last Travelers—rare magicians who choose a parallel universe to visit.

Grey London is dirty, boring, lacks magic, ruled by mad King George. Red London is where life and magic are revered, and the Maresh Dynasty presides over a flourishing empire. White London is ruled by whoever has murdered their way to the throne. People fight to control magic, and the magic fights back, draining the city to its very bones. Once there was Black London – but no one speaks of that now.

Officially, Kell is the Red Traveler, personal ambassador and adopted Prince of Red London, carrying the monthly correspondences between royals of each London. Unofficially, Kell smuggles for those willing to pay for even a glimpse of a world they’ll never see. This dangerous hobby sets him up for accidental treason. Fleeing into Grey London, Kell runs afoul of Delilah Bard, a cut-purse with lofty aspirations. She robs him, saves him from a dangerous enemy, then forces him to another world for her ‘proper adventure’.

But perilous magic is afoot, and treachery lurks at every turn. To save all of the worlds, Kell and Lila will first need to stay alive — trickier than they hoped.

I will review the full book nearer to release date but for now I will tell you a little bit about the first 150 pages.
There is a lot of detail to remember in this first section. There are three worlds, all very similar and I found that when I wasn’t paying enough attention I was easily confused by which people, pub or language belonged to which version of London. But once I got the hang of all these details I found myself getting completely immersed in the story. The world building was impressive, it was easy to image the cities and the people that inhabited them. Some of the characters had very similar names but thankfully personality wise, they were completely different, such as Powell and Parrish.
I loved all the characters but my favourite was easily Lila. The story doesn’t follow one character all the way through. Yes, mainly it followed Kell and Lila, but sometimes it would jump to follow a random characters who’s point of view would add another dimension to the story. It worked really well and I can’t praise V E Schwab enough.

So all in all I can honestly say that if I had only received the 150 page preview I would be salivating at the bit for the full copy. As it is, I can say that I have already pre-ordered myself a physical copy because I loved it that much!

I loved it that much I have given it my first 5 Voodoo rating of 2015!