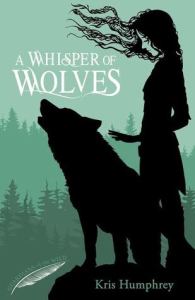 ‘”All animals know when something’s wrong,” she said. “Pigeons, wrens, starlings… they can feel the Narlaw too, just not as keenly as a Whisperer. The difficult part was convincing them to flock to the source rather than away from it, but that’s where being a palace raven comes in useful. Even city birds respect a raven.”‘ Loc 952

When a raven drops a white feather at the doorstep on the day of your birth, it is a symbol of your destiny. You are a Whisperer – a guardian of the wild. After many years of peace in the kingdom of Meridina, rumours are spreading of a planned invasion – could the demonic Narlaw be returning from the darklands? It is up to the Whisperers and their animal companions to defend Meridina, protect Princess Ona and stop the Narlaw from destroying their world.

When hunters from her village disappear without a trace, Alice suspects that something sinister is at work. With the help of Storm, her wolf companion, Alice fights to save her village. The Narlaw are on the attack and it’s up to the Whisperers to stop them…

I found Whisper of Wolves to be a quick-paced and rather enjoyable middle-grade novel. It was a little simple in plot and it didn’t really have a conventional build-up. Actually I don’t remember a build-up at all… I found that we were thrown straight into the mystery of the Narlaw and with it, straight into danger. Character and world-development therefore was more discovered as we went along. I would usually find this annoying but surprisingly it seemed to work well for A Whisper of Wolves.

The idea of animal companions has been used before in books like The Golden Compass series by Phillip Pullman and, like that series, it works well here. It’s that constant companion, someone to rely on.

There was a clear main character, Alice, who is the apprentice to the village whisperer. When everything goes wrong she steps up to the challenge and was a very likeable heroine with a go-getter attitude. I was a little thrown when her age was thrown in right at the end. I imagined her as a 15-16 year old but apparently she is supposed to be 12. The narrative is shared between Alice and the King’s Whisperer Dawn. There was so little of Dawns story that I didn’t find her side as interesting. Especially as her voice was very similar to Alice’s and the events that occur in both the city and the village are very similar. It may have been better if they had been separate stories or if Dawn had been much older perhaps?

The writing itself had a lovely flowing feel and made this an easy read. I think this story just needs a bit more fleshing out. More background information about the Whisperers and the Narlaw… they are never really explained. And more character time. It just seemed to be over soo quickly.

I think, with some development, this will make a good stepping stone for young teens to books such as Queen of the Tearlings and Phillip Pullmans The Golden Compass series.

2 comments on “Review: A Whisper of Wolves”