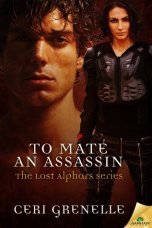 Love is her enemy…until his beast sets her free.
The Lost Alphars Series, Book 1
Cymbeline Kendall’s life is quiet, solitary—until a letter appears in her P.O. box. Then she becomes an Incendiary, a human chosen at birth to be trained to strike like lightning to take out the most dangerous of the Werekind, then fade back into the shadows.She is a weapon only to be used by the leader of North American shifters. But when she learns the Alphar was unseated three years ago, she sets out to find who’s been pulling her trigger.Kerrick Masterson has borne the burden of leadership for only a short time, yet he already feels the Alphar power tempting his soul toward the insanity that destroyed his predecessor. He has no time for the woman who breaks into his compound claiming to be his Incendiary, but his beast insists he make the time—for his mate.In one searing, soul-consuming breath, everything Cymbeline was taught to believe is ripped away. Yet the mystery of who’s been sending her orders remains…and finding the answer could lead to all-out war.Warning: Contains an assassin who doesn’t tolerate those who hurt the weak, and a shifter leader determined to unlock his new mate’s repressed emotions—even if that puts his balls at risk. Explicit sex, violence, and references to abuse that could be rough on sensitive readers.
-Netgalley

I just have to say, the description has it the wrong way around, she was the Incendiary first. She didn’t have a P.O Box as a newborn baby…
I feel bad for giving this 2.5 Voodoos, because it’s impossible to differentiate the difference between a good 2.5 and a bad 2.5. This is a good 2.5. I liked this story, but I found it was much like the children written about within the story. Highly enthusiastic and prone to rambling about weird stuff at odd times.
.
I really enjoyed the world this story was created in and I really liked the characters and I plan to continue reading the series, I’d like to know if certain things happen. However the writing style was a little off putting for me. Also, some things were contradictory. For example her being the Incendiary is meant to be a secret, so she goes about telling everyone. Then, at one point something happened fast, but a while later it was still happening….
.
My favourite character was Irisi. She has an interesting story and I know she’s not the next book, but I hope her story is in the one after that.  I can’t wait to find out more about all the characters.
.
The sex was semi steamy, extra descriptors and things were a little off putting and the references to abuse were not too severe, but were still there.
.