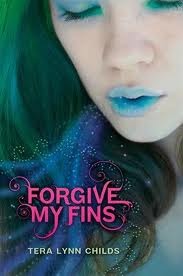 “Some people find beauty in chaos.”

Lily Sanderson has a secret, and it’s not that she has a huge crush on gorgeous swimming god Brody Bennett, who makes her heart beat flipper-fast. Unrequited love is hard enough when you’re a normal teenage girl, but when you’re half human, half mermaid, like Lily, there’s no such thing as a simple crush.

Lily’s mermaid identity is a secret that can’t get out, since she’s not just any mermaid—she’s a Thalassinian princess. When Lily found out three years ago that her mother was actually a human, she finally realized why she didn’t feel quite at home in Thalassinia, and she’s been living on land and going to Seaview High School ever since, hoping to find where she truly belongs. Sure, land has its problems—like her obnoxious biker-boy neighbor, Quince Fletcher—but it has that one major perk: Brody. The problem is, mermaids aren’t really the casual dating type—the instant they “bond,” it’s for life.

When Lily’s attempt to win Brody’s love leads to a tsunami-sized case of mistaken identity, she is in for a tidal wave of relationship drama, and she finds out, quick as a tail-fin flick, that happily ever after never sails quite as smoothly as you planned.

I read this in May 2013. I believe I originally got it as a kindle book, but half way through I decided it was worth buying it as a hardback and completing the collection. Somewhere towards the end of the book I regretted my decision however. Despite how it was all going, the books opted for the split-at-the-end-of-book-one pattern. I never read beyond book 1.

My review is based completely on my memory of reading this book (and limited update posts while reading, gotta love goodreads!), you’ve been warned.

I loved the consistent fish/sea references, for example ” ‘fraidy fish!”, they were little gems and pure genius. It’s little things like that that make stories so much more rounded and complete. I also liked the storyline. It wasn’t really a love triangle and up until how it was ‘resolved’ at the end I was completely behind the direction it was going in. I have to say, I feel they shot themselves in the tail-fin at the end there, especially having read up on the blurbs of books 2 and 3. I also liked how the tough-biker-boy-type also played the insecure she-wont-ever-like-me type too, it was cute.

If you’re happy with all sorts of angst and drama before the end, this book could just be for you!
Not a book for romantic types who love their HEAs’ to not come after a whole bunch of pain and upset.