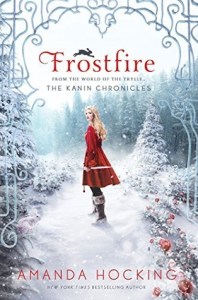 ‘I remember you…you were the plucky tracker, trying to claw your way up to be a guard. Nobody wanted you there, but you didn’t care. YOU wanted to be there.” Loc 2477/ p.213

Bryn Aven is an outcast among the Kanin, the most powerful of the troll tribes.

Set apart by her heritage and her past, Bryn is a tracker who’s determined to become a respected part of her world. She has just one goal: become a member of the elite King’s Guard to protect the royal family. She’s not going to let anything stand in her way, not even a forbidden romance with her boss Ridley Dresden.

But all her plans for the future are put on hold when Konstantin– a fallen hero she once loved – begins kidnapping changelings. Bryn is sent in to help stop him, but will she lose her heart in the process?

Frostfire has a great back story, rich with detailed traditions, racial differences and an epic fantasy environment. I enjoyed the vivid descriptions as it allowed me to imagine everything perfectly. I only wish there had been a little more action!

So Frostfire is the first instalment in an new YA fantasy series, that explores the folklore of changeling and trolls. Bryn is half Kanin (basically Earth Troll) and half Skojare (basically a Water Troll). Because she is a half-blood, she is treated as inferior. I’d like to think its because she has non of the skills but really she’s persecuted because she looks different, with blonde hair rather than brunette.

While on a mission to retrieve a Changeling (to return him and his trust fund to his real parents), Bryn encounters a traitorous Kanin named Konstantin, he’s wanted for attempted murder and for some reason he’s trying to kidnap the changeling she’s there to collect. What is he up to? What does he want with the Changelings?

I liked Bryn as a character, she wasn’t afraid to jump into the fray but she was also really indecisive when it came to men! She has a thing for her boss Ridley, but doesn’t think anything should happen between them, yet stuff does happen, and then she goes all cold and distant on him, it was really annoying. I hope they get a chance to have a relationship in book 2. I wasn’t so sure about her reactions to Konstantin. For someone she supposedly detests him she is oddly reluctant to dispose of him. I hope there isn’t anything in the pipe line there.

I understand that this is a beginning novel and that it was necessary to set up the world and all the history that goes with it but I wish there had been a little more action. There was a lot of talking, a lot! but the conspiracy itself developed really really slowly and I got a little bored. I hope that all this development work isn’t wasted and that the next instalment is action packed. We’ll have to wait and see.