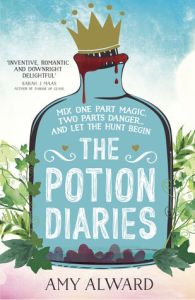 When the Princess of Nova accidentally poisons herself with a love potion meant for her crush, she falls crown-over-heels in love with her own reflection. Oops. A nationwide hunt is called to find the cure, with competitors travelling the world for the rarest ingredients, deep in magical forests and frozen tundras, facing death at every turn.

Enter Samantha Kemi – an ordinary girl with an extraordinary talent. Sam’s family were once the most respected alchemists in the kingdom, but they’ve fallen on hard times, and winning the hunt would save their reputation. But can Sam really compete with the dazzling powers of the ZoroAster megapharma company? Just how close is Sam willing to get to Zain Aster, her dashing former classmate and enemy, in the meantime?

And just to add to the pressure, this quest is ALL OVER social media. And the world news.

No big deal, then.

This was really quite amusing. It was light and fluffy and had such an easy-to-read writing style. I found it very hard to put it down and devoured it as quickly as I could.

Princess Evelyn is desperate not to marry a stranger that she doesn’t love so creates a love potion to give to her best friend Zain. But by accident she consumes it and the first face she sees is her own reflection. Evelyn slowly starts to go insane, consumed with the obsession of her reflection, and begins to lose control of the magical power within her. In order to save her and the city around her, all the alchemists are called to The Hunt, the hunt for the cure. Whomever can find the cure will win a large fortune and fame. No one needs this more than the Kemi family who lost the last Hunt to a company providing ‘Synthetic’ potions. But there is someone willing to sacrifice the city, and Evelyn, to gain ultimate power and she won’t allow the alchemists to complete their task.

I’ve seen it’s been marketed as The Princess Diaries meets The Hunger Games. And I suppose in a way there are bits of both. It has a happy and optimistic feel reminiscent of the Princess Diaries and obviously having a princess within the story helped. The only bit that reminded me of the hunger games was the romance between Sam and Zain. It seems sweet and innocent but there were twists and turns that made you doubt if it was real or not.

The characters were good, although some like Zol or the Queen’s Mother could have done with a little more detailing. I was happily surprised by the continued inclusion of a point of view from Evelyn. It was interesting to see how she perceived her reflection (as a completely separate person). It’s interesting to think that there wasn’t much world building, in a book that is set in a completely magical world, but in some ways I was glad, because it had the core elements and didn’t make the story slow or weighty.

I loved the urgency that the quest for the cure brought to the storyline and the constant back stabbing between the groups was entertaining. There was also the added bonus of a few long, on-going family feuds which were only slowly revealed as the story went along. I loved all the fairytale creatures and there magical properties. In some ways the search for the ingredients reminded me of Harry Potters – The Goblet of Fire, with everyone competing against each other without knowing what they will have to do next, and always ending up in dangerous situations. I think the ingredient assessments, that were added like Sam’s thoughts, were inspired, as they helped you understand why the ingredients were essential but also showed you how smart Sam was. (This was how I’d hoped Seriously Wicked would be)

In the end I really enjoyed The Potions Diaries and I can’t wait to see what will happen next in this light refreshing series. This would be good for younger readers and readers looking for something simple and quick to read.

Ooow apparently this is by the same person who wrote The Oathbreaker’s Shadow, (she wrote it under another name). Well I might have to go and check that out

2 comments on “Review: The Potion Diaries”