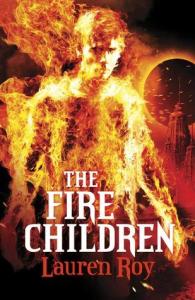 Two children escape the darkness of their underground dwellings, to find adventure, magic and terrible danger await anyone who ventures above ground.

Fifteen years have passed since Mother Sun last sent her children to walk the world. When the eclipse comes, the people retreat to the caverns beneath the Kaladim, passing the days in total darkness while the Fire Children explore their world. It’s death to even look upon them, the stories say.

Despite the warnings, Yulla gives in to her curiosity and ventures to the surface. There she witnesses the Witch Women — who rumors say worship dead Father Sea, rather than Mother Sun — capturing one of the Children and hauling her away. Yulla isn’t the only one who saw the kidnapping; Ember, the last of the Fire Children, reveals himself to Yulla and implores her to help.

Trapped up above and hunted by the witches and the desert wind, Yulla and Ember must find a way free his siblings and put a stop to the Witch Womens’ plans, before they can use the Fire Children to bind Mother Sun herself.

This had a lovely old-folk tale air to it and the world-building was really good with lots of interesting details and stories within stories, but I found the pace really rather slow. The Blurb mentions that Yulle sees one of the Fire Children being kidnapped but this doesn’t happen till about 30% of the way in. The story is quite simple in that its rather obvious what is going to happen and there is only one real issue which is really slowly built up towards but seems rather quickly resolved.

The characters were good. Yulle was easily likeable. Her sister, not so much. She switched so quickly from being nice to being cruel and back again. I didn’t really understand her. Ember was sweet and I found the Fire Children really interesting with their flaming skin that they could control. I wasn’t sure about the relationship that developed between Yulle and Ember, it seemed a little insta-love like. The Witch-women were a little one-dimensional. I think this was just because we didn’t really get to understand them and saw one side of them, the cruel side as they captured and tortured the Fire Children. They seemed a little deluded as they really hadn’t thought their plan through. I didn’t understand many of their actions or logic but it made for an entertaining ending.

I think the thing I liked the most about Fire Children was the stories about the Sun and the Moon, the Sun and the Sea, the Sea and the Wind. It was all so pretty and poetic and the way they were described and told by Yulle was interesting.

Overall I found this an ok story with interesting little touches that were sweet but I must admit there were parts that I found myself skim reading to keep the pace moving. This would make a good Middle-Grader’s book.