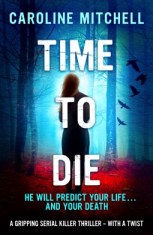 Thank you to Netgalley, the publisher and the author for the opportunity to read this book in exchange for an honest review!
Publish Date: 24th September 2015

He will predict your life… and your death.

Don’t ever cross his palm with silver.

He will reveal your most shameful secrets.

He will predict your death.

He is hiding a secret.

He is hiding a monster.

And all his predictions come true.

Investigating a series of chilling murders, Detective Jennifer Knight finds herself tracking a mysterious tarot card reader known only as The Raven.

As the death toll rises, Jennifer and her team build a picture of a serial killer on the edge of sanity, driven by dark forces. But these are not random killings. And the method behind the madness could be the most terrifying thing of all …

Especially when it seems the death of one of their own is on the cards.

Time to Die is an absolutely gripping serial killer thriller with a breath-taking supernatural twist.

Reading this book, I felt I was missing something and it wasn’t until I investigated the author after reading this that I discovered that this was in fact book 2 of a series. Goodreads didn’t even tell me this. I worked it out from her question section where someone asked her about the sequel to Don’t Turn Around and she mentioned the ravens coming. (I was actually checking her out cause some things in her England seemed a little too stereotypical, but not quite enough to be fake and I wondered where she was from. Just FYI, she checks out. haha!)

I think if I’d read the first book I’d have been less confused with this book, but having said that I wasn’t unbearably confused and it was just the odd reference and sometimes things weren’t explained as well as they could have been which made me feel I was missing something that clued me in to the fact there was perhaps a previous book. This book could probably be read as a standalone, however you’ll probably want to read the next one if, like me, you develop a fondness for Will. We don’t see so much of him throughout the book but he was certainly my favourite and I’d rather like to know what went on with his family and how he is and stuff. It’s a ploy I tell you.

I think I’d have enjoyed this book far more if there was more of a supernaturalness about it. It certainly is a thriller with a supernatural twist and I’m possibly more of a supernatural with a thriller twist kind of girl. I was sad that the tarot got a bad rap in this story at first, until it was explained it wasn’t actually the tarot that was evil, which was nice. I found it all well written and while it’s not my usual type of book, depending of the storyline of the next, if I stumble across it, there’s a high possibility I’ll pick it up. Not just to feed the Will fix, I promise. Their relationship is a fascinating mix and I’m curious to see where it goes.