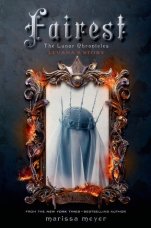 “From this day forward, you will be my sun at dawn and my stars at night and I vow to love and cherish you for all our days.”
- page 114

In this stunning bridge book between Cress and Winter in the bestselling Lunar Chronicles, Queen Levana’s story is finally told.
Mirror, mirror on the wall,
Who is the fairest of them all?
Fans of the Lunar Chronicles know Queen Levana as a ruler who uses her “glamour” to gain power. But long before she crossed paths with Cinder, Scarlet, and Cress, Levana lived a very different story – a story that has never been told . . . until now.
Marissa Meyer spins yet another unforgettable tale about love and war, deceit and death. This extraordinary book includes full-color art and an excerpt from Winter, the next book in the Lunar Chronicles series.

I liked this novella more than I thought I would – which shouldn’t be surprising considering I enjoy Once Upon A Time which revels in making the bad guys not so bad and the good guys that little bit evil. I did wonder if this was going to be like Poison by Sarah Pinborough (Admittedly I’m only part way through that book) where it SEEMS to be trying to convince you that the evil queen was misunderstood. That doesn’t happen here.

What it does do is give you a glimpse into who Levana was and how she became who she is today. Why she’s always veiled, why she’s doing what she’s doing and how she has a stepdaughter.

It’s a prequel, the whole thing taking place before Cinder. And it may seem odd to have it as a 3.5 instead of a 0.5 (we already have one of those) but while this story shows the early life of Princess Selene, it gives you more of an insight into the life of Winter from her birth up to her fathers death. One of her last comments to Scarlet is semi shown and we are more informed to enter her world next.

I chose 4.5 Voodoos for this because while it was good and I wont be forgetting it’s existence as you sometimes want to with novellas, I don’t know that I would read it again in a re-read of the series, especially since it takes you out of the flow of the main story. But having thought on it, perhaps I would read it first before the rest of the series. That could work out well.

This is most definitely a 3.5 book for a first read (or possibly after Winter, I’ve not read that yet, so I don’t know that the novella parts any vital information you NEED for Winter) But perhaps later you can read it when you like.