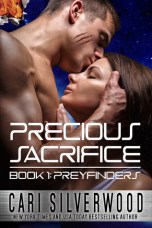 “Some small sound caught her attention. She swiveled. A blood-smeared hand appeared on the curtain behind Keyner.” – 76%

Jadd is an Igrakk Warrior, honed like the sharpest blade, to kill and to command his men, but his conscience gets in the way. When punishment entails becoming a Preyfinder and trialling the Pet-creating drug on a human called Brittany, he plans to stay calm and do his duty. Until he falls in love.
A Preyfinder is trained to withstand hardship and pain, but Jadd would rather kneel before a firestorm than leave his captive, Brittany, to be stalked and killed. The choice between love and loyalty to his soldier brothers may tear him in two.

I read this because I’d read Cyberella – set in this universe – and I wanted to see if this explained some of the unknown to me. It started to. at 104 pages it valantly tried – but I think it’s spread over the three books in the set. While I do understand more of this ‘verse, I’m still not 100% in on the deal. but that’s alright. I’ve decided I don’t need to know. I’m not overly fond of the whole women as pets concept that the Igrakk have. However, while Brittany was a little meh, she didn’t whine – which is quite important. And she also went with it. Possibly a little too much but whatever.

I’ll have to think on whether I continue with the next book – from the epilogue her sister seems far more interesting and more explanations should be given. But once you’ve read two out of three, you may as well make it a hat trick and I’m not sure about that.