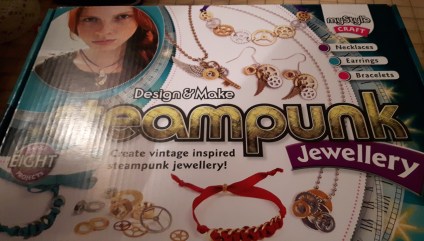 I bought this kit in the amazon sales and thought it was time to look at it.

This is what’s inside the kit:

There seemed to be quite a few pieces in there but I wasn’t sure that there was enough to make everything. It was pretty close, but not quite. Especially when it came to the gears bracelet, the second sized bronze gears weren’t in the set. I checked the box and it said ‘two sizes’ for both bronze and silzer which I think includes the steering wheel shaped ones because they’re not mentioned anywhere else, which is a shame cause I’d have made this: 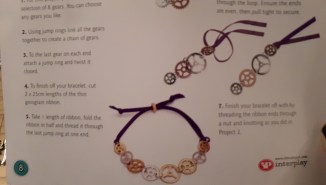 The things I liked the most were all over the pamphlet, but it recommends you start at project 1 and work your way up to the ‘harder’ projects. Of course, if you like things at the back, including the variations you’ll need to either start there or even buy extra components as you’re only given one large washer in each colour so you can’t make the earrings they show you. At this point I gave up with the manual – mostly – and broke out my twenty to make Steampunk Jewellery book by Carolyn Schulz for inspiration and I liked the keys with the swirls. 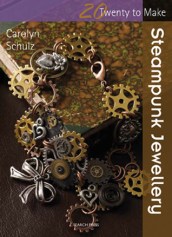 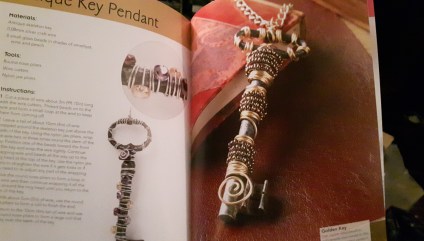 The wire that comes with the kit is oddly purple and probably a lot softer than the stuff used in the book. The pliers supplied are fat nosed too, luckily I have my own jewellery set so I used those pliers – Round nosed and fine nosed? Maybe? I made a swirl, then I wrapped some wire around the key and added a gear. the wire broke where I’d swished a bump so I started to wrap again, which caused a lump of pink wire, I almost got it tucked behind the gears so that’s ok. Once I’d added the second one I then added the wing sand kept wrapping up to make the second swirl. The jump rings are so flimsy you don’t really need pliers to open them, so you don’t want to put anything too heavy on them. 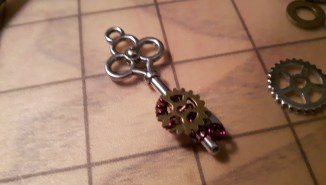 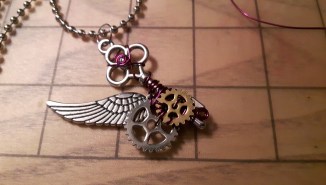 Next I decided to try using some ribbon, I almost liked the weaving thing with the ribbon and the washers so I thought to add the idea to some earrings. Not sure how I feel about them to be honest. I tied a knot and hit it with a bronze nut, then I ‘wove’ two bronze washers and a bronze gear onto the bottom. These may end up being taken apart. 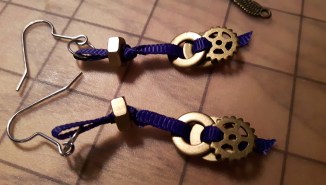 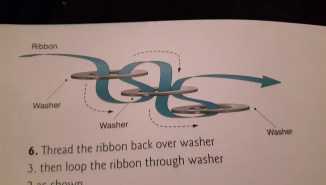 At this point I was eying up the other key and I wanted to make it look pretty, but I wanted to wrap it with wire and not pink wire. So I pulled out the gold wire I got from my local garden centre when they were selling off the Christmas decorations earlier this month – yeah, no I don’t understand how this relates either, but whatever – and decided it was a good colour to go with the bronze. I made another swirly and wrapped the key, then I added two wings and made something that looks like it belongs in a steampunk anime. I added the last tiny bronze gear because I could and made my own loop with more of the gold wire because I wasn’t going to put a flimsy silver one in this master piece! Then I added it to the bronze ball chain that came with the set.

It’s a shame there wasn’t a set of bronze keys, I’d have liked to try this as a pair of earrings and I’d certainly consider buying the supplies to do so in the future. In fact if I had money I’d be on the jewellery making suppliers right now! I mean, look at it, so pretty: 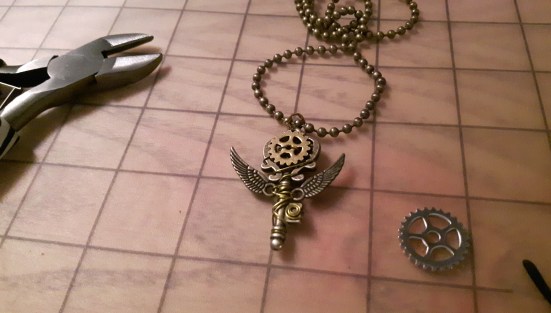 It’s a good set to get children ( or possibly even beginners like me) into making jewellery. I don’t think I’d have been happy with what I’d got if I’d paid full price for this set. RRP is apparently £19.99, amazon currently is selling it for £8.57 and I paid £6.08. You’re supplied with everything in the first three pictures I posted, the only thing’s I used that weren’t part of the set was my on gold wire and my own tools. You’re also supplied with some PVA glue to stick the gears together if you so wish. That sounded laughable to me, so I didn’t use it.

I really enjoyed making these and I may have found a new hobby. I’d love to make more things! Especially dangly earrings. 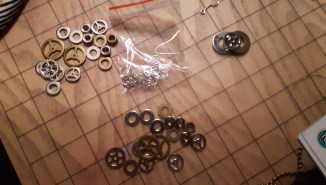 In fact, I might just get a pair out of what’s left. Possibly even a pendant too.