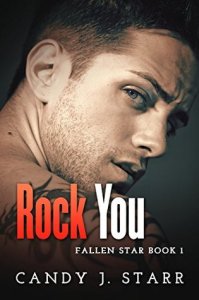 Working for a cranky, old hermit in an isolated house sounds like Ruby’s idea of heaven but her boss isn’t quite what she expects.

Tex is a fugitive from the rock and roll world – a tragedy abruptly halted his career. No one knows why, no one knows where he is.

The two of them try to live in the same house without ever seeing each other until Tex screws up, endangering their lives and forcing them to live in close quarters.

Suddenly, the idea of human contact seems more appealing, if only with each other.

The sanctuary they have built is enough for Ruby but the outside world encroaches. The man she’s grown to love is Tex the hermit, not Tex the rock star.

Their fledgling love can’t shine brighter than the rock dream but can Ruby bear to let him go?

Popsugar Challenge #14. A book you can finish in a day

I got this one for free on Amazon and chose to read it as one of my popsugar challenge books as it’s only 174 pages long.

For the most part I really enjoyed the storyline. It followed a girl called Ruby as she moved into a dusty old mansion house to take on a job as housekeeper. Ruby was a quiet girl who didn’t really do social interaction. She had never really been able to make friends because her parents constantly moved around while she was growing up and now she prefers solitude. Tex was the lead singer of a rock band, but now he lives alone in his big dusty mansion and ignores the world.

Some of the situations were a little far fetched for me. Like if the building had burnt down surely the sound studio would have been condemned as well. Even if it is standing, the structural integrity of the place would be questionable! But as a plot point to push the two characters together, I suppose it worked.

I was impressed with the characters. They were well rounded and easily likeable and I loved their banter. I enjoyed how slowly the relationship between the two of them built up, however I was really frustrated that nothing really happened. At one point they did end up in bed with each other and there was tension and fireworks and just as we thought something was going to happen… Bam! It didn’t! There is no real explanation why. If anything the excuse given was just really flimsy. I am not a fan of the cock tease move!  I think I would have preferred nothing to have happened at all!

All in all, this was fun but be prepared to be very frustrated! Here’s hoping book 2 will see some of that sexual chemistry put to good use!