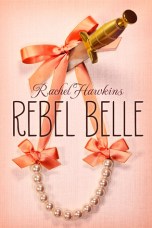 Just when life can’t get any more disastrously crazy, Harper finds out who she’s charged to protect: David Stark, school reporter, subject of a mysterious prophecy and possibly Harper’s least favourite person. But things get complicated when Harper starts falling for him—and discovers that David’s own fate could very well be to destroy Earth.

With snappy banter, cotillion dresses, non-stop action and a touch of magic, this new young adult series from bestseller Rachel Hawkins is going to make y’all beg for more.

At some point I forgot what this book was about, so that when I picked it up I had some vague notion it wasn’t contemporary, or it was about ninja belle’s or something. After the initial disappointment I discovered it was better. A proper belle from the Deep South is accidentally turned into a super warrior. What ends up being fantastic is that she seems to be small and she’s the super strong one. It’s a role reversal to be sure, especially at the end, but the best bit isn’t the male/female stereotypical-role switch but the big/little stereotypical-role switch.

Harper seems to be the stereotypical mean girl without the mean – which is pretty refreshing. She’s pretty focused on being good and nice and perfect, so becoming a super protector while she’s being crowned homecoming queen is pretty far out there for her. She takes it in stride though and it’s pretty nice reading about someone who takes this calmly. Usually there’s a big hissy fit and no one can get anything in over them being unreasonable.

Obviously this isn’t going to make complete sense as a story – it’s only 1/3 of it after all! but so far it’s been pretty good. The why of the protection detail was surprising and the end had me a little lost. I think it was simply because I’ve lost focus because I’m tired, but I’m still pretty excited to find out what happens next. And his reason for him being awful to her all these years? Perfect five-year-old logic, I love it.

Perfect blend of humour and tension going on, with a little romance thrown in. There’s also sort of a love triangle, but not a horrid one and it better not BECOME a horrid one. It’s likely to become a square soon and that might just make everything more awkward…I can’t wait!