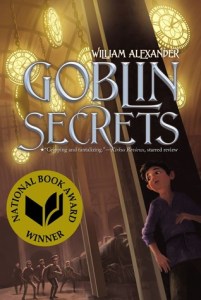 In the town of Zombay, there is a witch named Graba who has clockwork chicken legs and moves her house around—much like the fairy tale figure of Baba Yaga. Graba takes in stray children, and Rownie is the youngest boy in her household. Rownie’s only real relative is his older brother Rowan, who is an actor. But acting is outlawed in Zombay, and Rowan has disappeared.

Desperate to find him, Rownie joins up with a troupe of goblins who skirt the law to put on plays. But their plays are not only for entertainment, and the masks they use are for more than make-believe. The goblins also want to find Rowan—because Rowan might be the only person who can save the town from being flooded by a mighty river.

This accessible, atmospheric fantasy takes a gentle look at love, loss, and family while delivering a fast-paced adventure that is sure to satisfy.

I was disappointed by this book. I have this tendency to get very excited over award-winning books and end up setting my expectations too high. This is perhaps where most of my disappointment stems from but, even so, I think I would have felt a little deflated after reading this even if it hadn’t got that shiny sticker on the front cover. I will try to explain why.

I expected to meet a character, Rownie, who was devastated by the loss of his brother and in his desperation to find him stumbles into the company of Goblins! I expected lots of Goblin culture and weird but fantastic descriptions of what they looked like, what they ate… you know all the strange and different things they did! And I expected an adventure where they travel around trying to find Rowan (Rownie’s big brother).

What I got… well it was a bit strange. Some things I loved and other things I just didn’t care for. To start with Rownie didn’t seem all that broken up about his missing brother. In fact I don’t remember him mentioned his brother until he met the Goblins. I liked the idea of Graba, this half-human, half-mechanical chicken thing but I wanted more expressive description of how she looked. I struggled to imagine her and her weird moveable house. When Rownie meets the Goblins it isn’t on an expedition to find his brother it was actually on an errand to get supplies for Graba. Its only by chance that one of the Goblins mentions Rowan and informs Rownie that they know Rowan. I felt a bit lied to by the blurb. It gave me ideas that were completely unlike the story I read.

I did however love the concept of the masks and the plays. I would have likes some more descriptions but perhaps younger children have better imaginations and don’t need all the colourful details I do. I can actually see this story making a rather entertaining children’s animation but as a book, for me, it was just lacking that something that to make it sparkle.

I gave two voodoos because the concept was interesting and there were some chapters that I found entertaining but overall I don’t think I will be continuing this series. If anyone has any suggestions for books about Goblins I’d be very interested to hear them. I’ve been looking for an amazing Goblin story for ages!