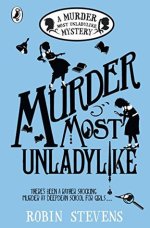 “On Wednesday morning, Miss Bell was (of course) still missing and everyone was still very excited about the idea of a gang from the East.”
- Page 69

When Daisy Wells and Hazel Wong set up their very own secret detective agency at Deepdean School for Girls, they struggle to find any truly exciting mysteries to investigate. (Unless you count the case of Lavinia’s missing tie. Which they don’t.)

Then Hazel discovers the Science Mistress, Miss Bell, lying dead in the Gym. She assumes it was a terrible accident – but when she and Daisy return five minutes later, the body has disappeared. Now Hazel and Daisy not only have a murder to solve: they have to prove one happened in the first place.

Determined to get to the bottom of the crime before the killer strikes again (and before the police can get there first, naturally), Hazel and Daisy must hunt for evidence, spy on their suspects and use all the cunning and intuition they can muster. But will they succeed? And can their friendship stand the test?

‘A skilful blend of golden era crime novel and boarding school romp . . . The novel works both as an affectionate satire and an effective murder mystery, and Stevens can go places Enid Blyton never dreamt of . . . Top class’ Financial Times

‘Plotting is what sets this book apart; this is about who was where at the time of the murder, and it’s about finding the chink in the alibi’ Telegraph

I read this book because book 2 is on my challenge list and I’m making an effort this month to get on with it and, of course, you have to read book 1 first!

Mystery books are not my usual genre it has to be said. While I do enjoy mystery, I often like it to be the sub-genre of fantasy or sci-fi or supernatural or something, but I enjoyed this book. Daisy was a little insufferable somewhere in the middle, but luckily she bucked up her ideas before I was too annoyed. Apart from that she seems like an impressive character so I hope she continues to grow out of it. Hazel didn’t quite fit her stereotype, which wasn’t a bad thing, but it was odd and while we often think more of our friends than ourselves, Daisy’s perfect blonde ways and Hazel’s dark haired bumblings did seem to fit into stereotypes.

The mystery is well presented and written from the point of view of Hazel Wong, the Watson to Daisy’s Homes, in the form of a case book. If I remember correctly, they’re 13 and in the third year at DeepDean, a boarding school for proper English young ladies. It’s set in the 1930s or there abouts and neither Daisy nor Hazel are exactly what they seem, which makes them the perfect investigators of everything around them. I felt pretty smug that I spotted something that the girls did not and I assumed it was a plot hole, until later when it was addressed in the Poirot type confession circle, which was kind of annoying. Still, it was something they missed, which means there’s room for improvement of their behalf, which is good, because that would make the rest of the series pretty dull if not.

It was interesting because there were some decidedly British things going on, but then sometimes there weren’t…and when Woolworths was laid on the table it was pretty nostalgic! I do miss Woolworths.