by Jake Halpern and Peter Kujawinski 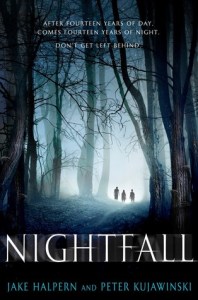 Popsugar Challenge #39. A book that takes place on an island

On Marin’s island, sunrise doesn’t come every twenty-four hours—it comes every twenty-eight years. Now the sun is just a sliver of light on the horizon. The weather is turning cold and the shadows are growing long.

Because sunset triggers the tide to roll out hundreds of miles, the islanders are frantically preparing to sail south, where they will wait out the long Night.

Marin and her twin brother, Kana, help their anxious parents ready the house for departure. Locks must be taken off doors. Furniture must be arranged. Tables must be set. The rituals are puzzling—bizarre, even—but none of the adults in town will discuss why it has to be done this way.

Just as the ships are about to sail, a teenage boy goes missing—the twins’ friend Line. Marin and Kana are the only ones who know the truth about where Line’s gone, and the only way to rescue him is by doing it themselves. But Night is falling. Their island is changing.

And it may already be too late.

A clever concept with lots of twists and turns and a wonderful sense of darkness but, for me, this wasn’t quite enough.

Nightfall is about an island that has 14 years of daylight followed by 14 years of night. In the 14 years of light Marin and her people populate the island but as the sun starts its long awaited decent on the horizon, Marin’s people must prepare to leave the island. They perform rituals and arrange their houses just as the sea hag status tells them…

‘THE HOUSES MUST BE WITHOUT STAIN.
LEAVE THEM AS THEY WERE.
COVER YOUR SCENT.’ Loc 2015

No one really knows why they must follow these rules only that they have for many centuries. But this year the sun sets a little faster than they were expecting and the Furriers that come in big boats to collect them, are later than usual, and everyone is just a little too unprepared. In the rush, Marin notices that her friend, Line, is missing. Worried, she persuades her brother Kana to help look for him but their search takes longer than they would have hoped… will they make it back to the boats in time?

I think my summary has just helped me figure out what, I felt, didn’t quite work. I think it was quite obvious from the start that they weren’t going to make the boats and yet, for the first half of the book, there is a huge focus on their rush to get back there in time. There are hints at the idea of monsters in the dark but not enough to really build up the suspense. I would have liked to hear folk stories of children going missing in the dark woods or claw marks on doors but there wasn’t anything like that and this was reflected in the fact that the children weren’t really scared of the on coming darkness but the idea of not seeing anyone else for 14 years.

I liked the characters. Marin and Line had a cute teenage attraction thing going on that wasn’t too in your face. I liked that Kana was jealous of his sister and Line’s closeness. That he felt left out. But I was happy that the bond between brother and sister was strong enough for them to look after each other.

The second half of this novel was much better than the first. When the fear finally started to show and monsters started to appear, it suddenly became a lot more interesting. (The idea of ice and darkness always had me thinking of nightwalkers but it wasn’t quite as scary as that.)

All in all it was ok and I agree with its middle grade rating – gorgeous cover by the way.

If you enjoyed this you may also like Fire Children by Lauren M Roy, it’s a fantasy book with a similar idea, that everyone has to leave their homes when the days get to hot and the god children come down to Earth.