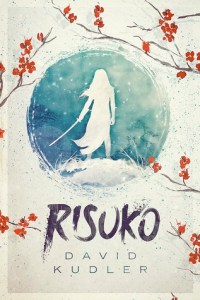 Thank you to Netgalley and the publisher for the chance to read this book in exchange for an honest review.
Publish Date: 15th June 2016

Can One Girl Win A War?

Though Japan has been devastated by a century of civil war, Risuko just wants to climb trees. Growing up far from the battlefields and court intrigues, the fatherless girl finds herself pulled into a plot that may reunite Japan — or may destroy it. She is torn from her home and what is left of her family, but finds new friends at a school that may not be what it seems.

Magical but historical, Risuko follows her along the first dangerous steps to discovering who she truly is.

Kano Murasaki, called Risuko (Squirrel) is a young, fatherless girl, more comfortable climbing trees than down on the ground. Yet she finds herself enmeshed in a game where the board is the whole nation of Japan, where the pieces are armies, moved by scheming lords, and a single girl couldn’t possible have the power to change the outcome. Or could she?

Risuko is one of those books that, as a young teen, I probably would have loved it but, as an adult, I found it quite simple.

Risuko is about a young girl who is sold to a noblewoman by her mother. Risuko is taken far away from home to live in a compound with many other women. From the outside these women are seen to learn how to dance, play music and cook but not everything is as it seems. There is a war rampaging across Japan and Risuko may find her new ‘dancing’ skills and knife skills more useful than she originally thought.

I think this book is easily aimed at middle grade children. It’s full of atmosphere and interesting cultural elements but it’s overall plot is very simple. The first half of this book is dedicated to introducing the reader to Japanese culture and history, which was really interesting but became a little repetitive after a while and slowed the pace of the book right down. I found the very beginning of the book very confusing, as I didn’t understand why the noblewoman had taken Risuko or why her family wanted to get rid of her. As the book progressed, I started to wish for something big to happen, but it didn’t. What I did get  though, was a subtle build up of sneaky deeds which were easy to over look. I was surprised how much I liked this in the end. It fit perfectly with the story-line and the general gentleness and feminine feel this book had. It was quite clever actually.

Character wise, I liked Risuko. She was easy to connect with and I liked that she was a strong character with a mischievous side, which kept getting her caught. I didn’t really like Tourmi, another girl brought to the compound at the same time as Risuko. I didn’t understand why she would instantly dislike Risuko and why she had to be so mean to her all the time, especially when she seemed capable to get on with everyone else!

In the end, while I liked a lot of this book, I just didn’t find the plot that exciting. It was easy to predict once I knew what I was looking for and it’s pacing was just too slow. I still stand by the thought that I’m probably to old for this book and therefore would recommend this for younger readers. I did think at one point that this was similar to Gail Carriger’s Finishing School series, another series I felt I was just to old for. Risuko may not have the same humor as Gail Carriger’s books but it has the same level of detailing and easy going plot. So perhaps if you enjoyed Etiquette and Espionage you might like this series too.