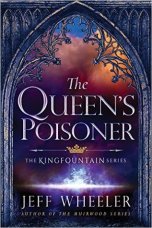 “Men ought either to be indulged or utterly destroyed. If you merely offend them, they take vengeance. If you injure them greatly, they are unable to retaliate.”
-Page 256

King Severn Argentine’s fearsome reputation precedes him: usurper of the throne, killer of rightful heirs, ruthless punisher of traitors. Attempting to depose him, the Duke of Kiskaddon gambles…and loses. Now the duke must atone by handing over his young son, Owen, as the king’s hostage. And should his loyalty falter again, the boy will pay with his life.

Seeking allies and eluding Severn’s spies, Owen learns to survive in the court of Kingfountain. But when new evidence of his father’s betrayal threatens to seal his fate, Owen must win the vengeful king’s favour by proving his worth—through extraordinary means. And only one person can aid his desperate cause: a mysterious woman, dwelling in secrecy, who truly wields power over life, death, and destiny.

The main character in this is Owen, but the book is named for a semi support character, which is interesting and I’m wondering if that’s going to be the same with the other two books (The Thief’s Daughter/The King’s Traitor). It’s something I haven’t seen/noticed before So I was surprised when it turned out Owen was the main person in this story (I don’t know why, cause he’s the centre of the blurb!)

I quite enjoyed this book, it had the same kind of pace all the way through which made it feel calm and possibly that not much had happened. Things did happen of course and while some of them were big things, they didn’t exactly feel like it. Possibly because we’re living the story through the eyes and ears of an 8 year old nobleman’s son. It felt a little slow at first, but once I got used to it, it felt like it picked up. Interestingly, I went into this thinking Severn a bad guy and at the end I felt like he wasn’t. This might have been Owen’s perception however, as I’ve read the blurbs of book two and three and where this story goes next is going to be interesting.

I think Owen was my favourite character. He coped really well with everything. The Queen’s Poisoner was a little too vague sometimes, I’d have liked to know what was going on in her mind! And  Evie Just sounded exhausting, but she became Owen’s best friend so she can’t be all bad. They make an interesting pair, shy and quiet Owen and headstrong and loud Evie. But she gives his courage and protects him and helps keep him safe from the king so she’s pretty decent too.

This world contains magic in the form of Fountain Blessed. Despite being too young, Owen starts to fake show signs of being Fountain Blessed with the help of others, to save his life, but there’s a bigger surprise.

As this is the first book in a trilogy I’m not surprised I’m left with a few questions, I just hope they’re answered soon!