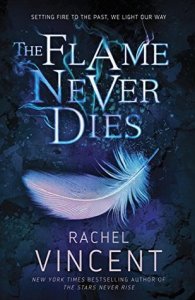 Thank you to netgalley and the publishers for the chance to read this book in exchange for an honest review.
Publish Date: 16th of August 2016

ONE SPARK WILL RISE

Nina Kane was born to be an exorcist. And since uncovering the horrifying truth―that the war against demons is far from over―seventeen-year-old Nina and her pregnant sister, Mellie, have been on the run, incinerating the remains of the demon horde as they go.

In the badlands, Nina, Mellie, and Finn, the fugitive and rogue exorcist who saved her life, find allies in a group of freedom fighters. They also face a new threat: Pandemonia, a city full of demons. But this fresh new hell is the least of Nina’s worries. The well of souls ran dry more than a century ago, drained by the demons secretly living among humans, and without a donor soul, Mellie’s child will die within hours of its birth.

Nina isn’t about to let that happen . . . even if it means she has to make the ultimate sacrifice.

Well I wasn’t expecting that! The Flame Never Dies is an action packed, evil and twisted continuation of The Stars Never Rise (My Review of which, can be found HERE). Apparently this series is just a duology, so that’s it, it’s over! But…but that ending was so open?! That can’t be it?! That’s almost cruel. I LOVE IT!
.
The Flame Never Dies is set a few months after the events of The Stars Never Rise. Nina and the other members of Anathema are now outside the city and are fending for themselves in the Badlands. They’ve finally escaped the clutches of the corrupted Church and are forced to steal food and kill degenerates in order to survive in the wild. They need to adapt quickly and it’s not going to be easy considering they have a pregnant Melanie and an exorcist in transition (Grayson) not to mention the Demons in the darkness! The Church may be out of the picture but now there are other, more dangerous Demons after them. Kastor is coming for them and they will all have to fight to keep their souls.
.
The first half of this book was filled with aimless wanderings through the Badlands. The characters were able to bond and we got to know each of them a little more, but for me, it was a little too aimless, I found myself constantly getting distracted by other things and I hate it when that happens. I felt the loss of the Church, because without their constant threat I just didn’t feel the same evil and sense of urgency.
.
I was wrong to get so complacent though. SO WRONG! It wasn’t long before there was a new threat and this one was much harder to spot, it left everyone vulnerable and me questioning everyone and everything!
.
This series is probably one of the best Urban Fantasies I’ve read. It successfully takes everything familiar and twists it into something new and fascinating. It has one bad ass main character, Nina. Nina is vulnerable and full of doubts but has determination and a ferocious loyalty to her family and friends. It makes her very easy to like and very easy to understand. She’s unbelievably brave. I can’t believe what she’s gone through… my heart breaks…
.
If you enjoyed the first book of this series you will definitely enjoy this one especially once they enter Pandemonium but be warned there is heartache and fear ahead and don’t expect a clear-cut finish. Even so, it’s definitely worth picking up.
.