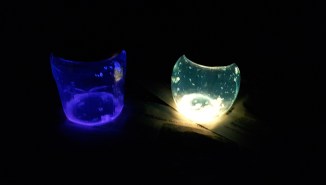 I’ve seen these around the place and I really wanted to try them so here we go!

PLEASE NOTE: It is advisable to cover your surface with newspaper and to wear gloves. Inside glowsticks is a glass tube which is what you crack to activate it. This is what you’re shaking onto your jars. If you require supervision, please make sure you have it. (I did!)

You’ll need some newspaper, some gloves, some jars, some scissors and some patience.

First you need to activate the sticks, crunch time! then you need to cut off the end. Cutting off both helps the inside out, but you do need to be careful.

(you will end up with pretty scissors, so if you don’t want to be scrubbing them afterwards I recommend using an old pair) once the ends are off just give them a shake to splatter the insides around the jar.

The little bits of glass will go all over the jar too and you will see them as flecks in the jar. I used two blue and two pink and it made a sort of purple in the jar, but the pink didn’t show up well in the pictures. My friend used a long yellow one and two green, so that’s possibly the same as 3 smaller yellows. I’m not sure if it was the colour choice or the extra stick but the yellow/green seemed so much brighter than the blue/pink. So bright you can read by it! 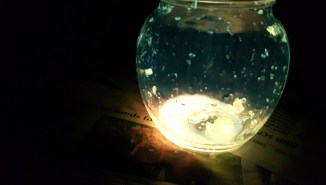 I was amazed at the glow of the yellow and green one! So much brighter than the sticks, but I was very paranoid about the little bits of the glass getting everywhere (because of The Immortal by Christopher Pike. Thanks Pike!) so I don’t think that I’ll do this again. Also, we couldn’t get the gloopy stuff to stick to the sides of the jar. It kept just sliding to the bottom. Also, once the jar stopped glowing, there’s the problem of what to do with them…Do you wash them out and if so how?! 24 hours later, the yellow and green one has no more glow and the blue and pink just a tiny amount. The two glowsticks that were activated but not used are still glowing and don’t seem to be dimmer.