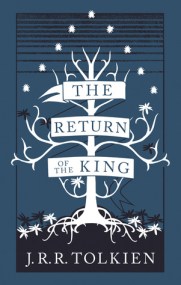 “In the upper rooms were little rows of hard beds and on every wall there was a notice and a list of Rules.
Pippin tore them down.
There was no beer and very little food, but with what the treavellers brought and shared out they all made a fair meal;
and Pippin broke Rule 4 by putting most of the next day’s allowance of wood on the fire.”
-Page 1000

The Companions of the Ring have become involved in separate adventures as the quest continues. Aragorn, revealed as the hidden heir of the ancient Kings of the West, joined with the Riders of Rohan against the forces of Isengard, and took part in the desperate victory of the Hornburg. Merry and Pippin, captured by orcs, escaped into Fangorn Forest and there encountered the Ents.

Gandalf returned, miraculously, and defeated the evil wizard, Saruman. Meanwhile, Sam and Frodo progressed towards Mordor to destroy the Ring, accompanied by Sméagol – Gollum, still obsessed by his ‘preciouss’. After a battle with the giant spider, Shelob, Sam left his master for dead; but Frodo is still alive – in the hands of the orcs. And all the time the armies of the Dark Lord are massing.

This took forever to listen to! The ring was at Mordor, the king was crowned and married and there was still HOURS to go!! So I knocked the speed up to 1.2x… I really couldn’t understand what was left that would take that long!

The liberation of The Shire! This wasn’t in the film which is really sad because I actually loved it! I guess they decided that Film Frodo was tired and needed a rest?? It didn’t quite feel like it fit in with the pace of the rest of the book, it was beginning to wind down and then it sort of just kept going…

Someone once said to me that they found that they didn’t care about Frodo and Sam at one point and ended up skipping ahead and coming back. I’m not sure when this could have been because I got to the end of book two and we left Sam and Frodo in a bit of a situation and when I started this book we were back with the others and I found that I didn’t care what was going on with these guys so much because I needed to get back to Sam and Frodo, despite already knowing the outcome! I think I may have skipped to them if I’d been able before returning to the main battle.

The book is quite good in explaining to you when things are happening in relation to the other half of the book, (unable to switch as the film did for fear of confusing the reader) with sentences like “While Sam and Frodo were working out the rules to Cluedo, Gandalf was teaching Legolas the Samba.” or what have you which was actually really fantastic (despite my bad memory and inability to remember what actually happened when…)

I have to say hat despite my horrendously beautiful set of these books, I do think that LISTENING to them was the best decision I could have made as I’m pretty sure I’d have failed at reading them. Perhaps one day I will read them, but with the story already covered I know what to look forward to and what to skim now.

It was surprising just how much of the books was actually in the films, so often the book world just contains so much more so I’m impressed with the film adaptions. I do think I need to re-watch them now and see how I feel now – especially as I own extended versions!

I’m somewhat sad that Gandalf’s famous “YOU SHALL NOT PASS!” was actually “YOU CAN NOT PASS.” But I was ridiculously happy that Sam still said “Maybe I can’t carry it for you Mr Frodo, but I CAN carry you and it too!” – I always found that a powerful line and it was no less so here.